Another casualty of Russia's war: Some Ukrainians no longer trust their neighbors

Sipping homemade wine, Tsyba recounts how four intelligence agents showed up at his house outside Kupiansk early last month, just a few days after the northeastern Ukrainian town was liberated from Russian occupation.

They were looking for Russian collaborators.

"'Are you these people?" he says the agents asked him and his wife. "Get your things. Come with us."

The agents were part of the Security Service of Ukraine, known as the SBU. They had badges. They had weapons.

"It was scary," says his wife Svitlana.

The officers drove them to the police station, where they questioned the couple for two hours. They pressed Svitlana about her work as a clerk for the surrounding villages of Kupiansk.

They wanted to know why she was continuing to work for the Russians. She told them she didn't feel like she was. She said she was simply continuing her work and helping her neighbors endure a very difficult reality.

As a clerk, she handles all the legal paperwork for civilian life — wills, marriage certificates. But during the occupation, she also was collecting names of qualified villagers who could receive Russian payments of 10,000 rubles, a little more than $160.

"I understand that we should have probably realized with our actions ... maybe by helping people, we were also helping the occupiers," she says.

She doesn't blame the SBU for questioning her. They were doing their job, she says. And, she points out, they let her go. She says they told her they didn't think she broke any laws.

But she doesn't understand why her neighbors — who she says she was trying to help — reported her as a collaborator. She said they asked to be included in the Russian payments.

"From our village, there wasn't a single person who didn't take that money," she says. "But I understand. People had to survive. I don't blame anybody. But how am I guilty?"

As towns recover from occupation, residents perceive their neighbors differently

In recently liberated towns along the front lines of the war in Ukraine, authorities have been focused on reaching survivors, documenting war crimes and beginning the process of rebuilding homes and buildings.

But another challenge that is emerging is how months of Russian occupation have ripped apart the social fabric of these towns and villages.

Neighbors no longer know whom they can trust. They don't know who was a collaborator.

Andriy Besedin, the acting mayor of Kupiansk, calls this a "huge problem."

His town was liberated on Sept. 9 as part of the large Ukrainian counteroffensive across the east and south. It's a strategically important location along the Oskil River, with a bridge and railway depot.

The residents have been through tremendous turmoil.

First, the Russians invaded the town just a few days after the war began in February. Officials say Russian forces held and tortured many residents.

During the occupation, people were simply trying to survive. As the months went by, resisting turned into adapting.

Now, after more than six months of occupation, the Russians are gone. Ukrainians are back in control. And residents, again, are having to adjust.

Besedin says some people feel betrayed by their neighbors and colleagues. Some of the smallest acts of cooperation with Russian occupiers are interpreted as signs of collaboration.

Those convicted face up to 15 years in prison, based on new laws passed after the start of the war.

Schools and hospitals are slow to heal

Other residents blame themselves for not resisting the Russians enough, Besedin says.

"It will take time," he says. "People need to psychologically recharge. And we as a government need to provide them with the conditions so that they can understand that Ukraine cares for them."

He notes that the challenge is especially great in Ukrainian schools. Teachers who resisted the Russians are now refusing to work with colleagues who accepted contracts to teach under the Russian education system.

Some of the teachers who accepted Russian positions now say they were unaware of the potential consequences and felt they were simply helping the children.

Tatiana Shmyhyrska, the principal of the largest elementary school in the nearby village of Shevenchoke, acknowledges that there are different levels of cooperation, but says teachers who traveled to Russia for training — and began the school year under the Russian system — should not be allowed to teach Ukrainian children.

And she's uncomfortable that she's being asked by Ukrainian officials to collect information on possible collaborators.

"Why the situation is so disturbing is because there is a feeling that they are trying to push responsibility onto our shoulders," she says.

There are similar challenges at the Kupiansk hospital, where doctors were pressured to treat Russian soldiers.

Dr. Yevgeniy Sinko, the hospital's head of medicine, says he was held hostage and tortured by Russian forces after refusing to turn the hospital over to the Russians.

But he says some doctors did agree to treat Russian soldiers. He believes they should not be judged unfairly.

"According to the Geneva Convention, we have to treat them," he says. "We are doctors here."

Sitting at their kitchen table, Volodymyr and Svitlana Tsyba say they're ready to move on, but acknowledge they're more reserved with neighbors now than they were before the war.

"I just take it as another life situation," Svitlana says.

Volodymyr is less circumspect. He insists he's not someone who keeps a grudge. But, he says, he has a good memory.

"Now I know who I would go into battle with and who I wouldn't," he says. "Even amongst my friends." 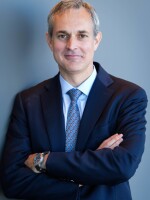 Franco Ordoñez
Franco Ordoñez is a White House Correspondent for NPR's Washington Desk. Before he came to NPR in 2019, Ordoñez covered the White House for McClatchy. He has also written about diplomatic affairs, foreign policy and immigration, and has been a correspondent in Cuba, Colombia, Mexico and Haiti.
Sign up for our newsletters!
Keep up with all the latest news, arts and culture, and TV highlights from KPBS.
LATEST IN PODCASTS
LATEST IN EVENTS
LATEST IN TV HIGHLIGHTS
Election 2022: Live results
Explore all national, state and local returns now.
See results →
More News