At La Jolla Elementary, A Call For Improved Familiarity With The Black Experience

Above: Donald Moore speaks during a forum on racial profiling at La Jolla Elementary School, Oct. 22, 2018.

We're sorry. This audio clip is no longer available.

Dozens gathered at La Jolla Elementary School for a forum on racial profiling Monday. The event came after a school email warned parents of a black man acting suspiciously in the area.

Some attendees defended their principal, saying she was trying to keep students safe with the email. Others argued the vague description put black boys and men in the community at risk of harassment or worse. They said children too often only hear about African Americans in the context of crime and called for schools to better expose students to the black experience in the United States.

One way to do that, said Donald Moore, who is African American and worked as a union organizer in La Jolla schools, is to recruit more people of color who interface with students and parents regularly. Nationwide, less than 10 percent of principals and less than 7 percent of teachers were black during the 2015-2016 school year, according to the most recent federal data.

“I think they get to see a black man as a positive role model,” he said. “Unfortunately, on the news, a lot of times what we hear in the description of a person of color is some criminal activity.”

Moore said the email would have put him at risk if he was in the community that day. Another man, who is black and has a black child at La Jolla Elementary, said he avoids running in his neighborhood at night or jumping his fence if he forgets his house keys because he believes passersby would get scared or report him.

“Whose safety are we talking about?” he said during the forum. “The issue is safety, and our child was less safe as a result of that email.”

Nearly 65 percent of teachers were white during the 2016-2017 school year, according to state data. That’s compared with nearly 5 percent African American, about 17 percent Latino and nearly 5 percent Asian. Demographics are not readily available for principals in the district. 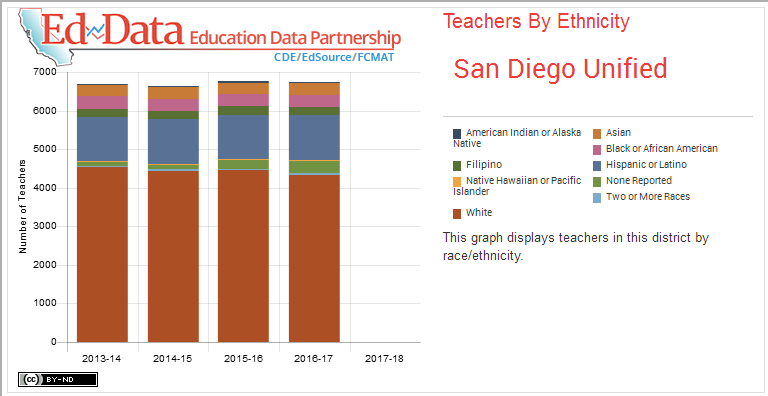 In San Diego, as in the rest of the country, it’s a pipeline problem.

“Knowing that less students than ever are entering the teaching profession, it makes it that much more difficult for us to recruit diverse candidates,” Thede said. “If you look across the nation, we’re all recruiting from the same candidate pool.”

In 2014, San Diego Unified embarked on an effort to address the problem. It has worked more aggressively to recruit diverse teacher candidates, Thede said. Now it’s working at the front end of the pipeline, building a program that would bring more of its own graduates — who reflect the region’s diversity — into the teaching profession.

The program would help students gain experience as tutors, receive mentorship and take college education courses during high school. It would then feed them into a local community college to earn an associate’s degree, and then to a local university to earn a bachelor’s degree and teaching credential concurrently. Similar programs in other states tend to be more diverse than traditional pathways.

In the meantime, attendees Monday pledged to keep working to get to know one another. It’s unclear if the district has more planned for La Jolla parents. Districtwide, students are talking about race via social-emotional learning curriculum that explores identity and the Anti-Defamation League’s No Place For Hate anti-bias training.

“We have a sincere, complete and total dedication to confronting bias, to looking inwardly at ourselves, to being better every day,” Thede said of the district. “It’s not something that we can put up on a board and say, we’ve done it, we’re all culturally sensitive human beings. We can’t do that because we’re all human. So for us, it is an everyday look, it is an everyday conversation.”

San Diego Unified reflects a nationwide trend of having disproportionately few teachers of color. At a forum, community organizers called for the school to help its students get to know black people and their experience in the United States.

San Diego news; when you want it, where you want it. Get local stories on politics, education, health, environment, the border and more. New episodes are ready weekday mornings. Hosted by Anica Colbert and produced by KPBS, San Diego and the Imperial County's NPR and PBS station.

KPBS Midday Edition is a daily radio news magazine keeping San Diego in the know on everything from politics to the arts.