And I'm Deborah Amos in for Renee Montagne.

The FBI is investigating a former Florida congressman. Did he break the law by reportedly sending suggestive e-mails and text messages to teenage boys? Republican Mark Foley abruptly resigned last week after reports surfaced that he had sent the messages to congressional pages. House Speaker Dennis Hastert has asked the Justice Department to look into the matter.

As NPR's Luke Burbank reports, questions of who knew what when have put House Republicans on the defensive.

LUKE BURBANK: This is not the way Republicans wanted to spend the first official weekend of their pre-election blitz.

Mr. NEWT GINGRICH (Former House Speaker): There was no proof. There was nothing that I know of in that initial round that would lead you to say in a normal circumstance that this is a predatory person.

BURBANK: That was former House Speaker Newt Gingrich, who showed up on Fox News Sunday defending the decision by his former colleagues to allow Representative Mark Foley to continue serving for nearly a year after initial allegations surfaced that he'd sent inappropriate e-mails to a 16-year-old former House page. Gingrich offered his theory as to why Republican leaders didn't deal more harshly with Foley back when they first got wind of the e-mails.

Mr. GINGRICH: I think had they overly-aggressively reacted to the initial round they would also been accused of gay bashing.

BURBANK: Foley is single. The page was male. Republicans say that when they initially learned of the e-mails they were under the impression they might be overly friendly but not sexual in nature. Foley had asked the page what he wanted for Christmas and he'd requested a photo. When that boy told a congressional staffer that the e-mails made him feel "sick, sick, sick," word got back to Republican John Shimkus of Illinois. He runs the House Page Board. Shimkus says he told Foley to leave the page alone. But he should have done more, according to Pennsylvania Democrat John Murtha, who yesterday appeared on ABC.

Representative JOHN MURTHA (Democrat, Pennsylvania): It's outrageous if they knew any extent at all of what happened. I just cannot believe that they allowed this to happen and just told him, okay, stay away from this kid.

BURBANK: Foley may have stayed away from that young man, but allegedly not some others. Last week, ABC News confronted Foley with a series of sexually explicit text messages that he had allegedly sent to other underage male pages.

By that afternoon, Foley was gone, resigned from Congress with a three-sentence written statement, leaving Democrats and journalists wondering what Republican leaders like Speaker Dennis Hastert really knew and when they knew it.

Mr. RON BONJEAN (Spokesman for House Speaker Dennis Hastert): The speaker has no knowledge of sexually explicit e-mails that were sent by Mr. Foley to anyone.

BURBANK: Ron Bonjean is a Hastert spokesman. Last Friday when the news broke, he said Hastert had never heard about any of the e-mails. But then another prominent Republican in the House, Campaign Chairman Thomas Reynolds, said he had told the Speaker about the allegations. Hastert then changed his statement saying he did not remember hearing about the allegations but wasn't disputing Reynolds' account. Hastert also said he was sure he was unaware of any sexually explicit communications. That explanation did not satisfy Democrats like John Murtha.

Rep. MURTHA: I don't know what they saw, but it's really makes me nervous that they look like they tried to cover it up.

BURBANK: Critics allege House Republican leaders were more worried about a scandal and the loss of Foley's seat in the November elections than they were about getting the truth out.

Adding to the bizarre events of the last few days is the fact that Mark Foley was co-chairman of the Congressional Missing and Exploited Children's Caucus. In 2002, he described for NPR's Neal Conan how pedophiles use the Internet to meet children.

Mr. MARK FOLEY (Former Republican Representative, Florida): Let me give you an example. A coach, Boca(ph) was his screen name - he was a rabbi from Boca Raton - basically enticed a young person via the Internet to having a sexual relationship. The Internet is a very powerful tool. It's a positive tool for education, but it also has some unintended consequences.

BURBANK: Now Speaker Dennis Hastert has formally asked the Justice Department to investigate whether Foley acted criminally with the e-mails and text messages. 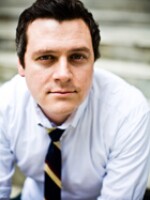 Luke Burbank
Luke Burbank is kind of amazed that NPR is letting him co-host its new morning show, The Bryant Park Project, NPR's new morning news show launched on October 1, 2007.
Sign up for our newsletters!
Keep up with all the latest news, arts and culture, and TV highlights from KPBS.
LATEST IN PODCASTS
LATEST IN EVENTS
LATEST IN TV HIGHLIGHTS
Get ready to vote
What questions do you have about the Statewide General Election coming up on Nov. 8? Submit your questions here, and we'll try to answer them in our reporting.
Launch →
More News