On any given day in Los Angeles, more people than ever are wondering not only when, but whether they'll have a meal. The economic downturn, a shrinking corporate presence that used to provide philanthropic contributions, and a growing population of poor in the region are straining the resources of local food banks to the utmost -- all of which makes Helen Palit a little crazy, because she feels the problem doesn't have to be as acute as it is.

"There is so much good food in Los Angeles that goes to waste every day," she moans.

Fifteen years ago, Palit decided to do something about that. She founded Angel Harvest, which acts as a modern gleaning operation: It makes the rounds of corporations and businesses that have good, edible leftover food and swiftly delivers it to shelters, food pantries and other organizations around the city that can use it.

Building on that model, L.A. City Councilman Jose Huizar introduced an initiative last year that urged city agencies to look for places to donate edible surplus food. Last month, the council unanimously passed what's known as the surplus food ordinance, which mandates that city agencies and the businesses that have contracts with them donate usable leftovers. Huizar says some branches of the city, such as the Los Angeles Convention Center, already do this.

"They're very efficient, and they often donate thousands of meals a week. That means a lot in a city that has the number of hungry people we do," Huizar says.

In addition, notes the councilman, the demographic of who's hungry in L.A. has changed radically in the past couple of years.

"It's not just the chronically homeless, which was enough of a challenge," he sighs. "What we're seeing more and more are whole families. They have a roof over their heads, but in order to keep their place, they might be choosing between rent and food."

The food pantry at St. Augustine's Catholic Church in Culver City illustrates his point. In the church parking lot, under a makeshift shelter, steel shelves are stocked with fresh bread, piles of produce, fresh meats and cheeses that have been donated by local businesses. Many of the people shopping from the shelves don't look poor; they are well-dressed -- and pressed to provide for themselves. An out-of-work disabled actor named Thomas is in a neatly pressed button-down shirt and a good storm jacket.

"The rent is due, and that has to be paid first, so if I didn't get something here," he explains, "I wouldn't be eating today. That's just the way it is right now."

At the entrance to the pantry, a slender, pretty woman hesitates and consults a piece of paper that has sent her to this address. Her name is Marina -- she's too embarrassed to give us her last name -- and this is her first time at a food pantry.

"I had a job at a data-entry company," she said, as tears quietly slide down her cheeks. But she just lost it. "My daughter and her two children just moved in with my husband and me because their family restaurant just closed."

Marina says if it was just her and her husband, they'd probably manage to struggle along, as he still has his job. "But if that goes, we are sunk," she says.

But the addition of their grandchildren make provisioning harder.

"They eat fruits and vegetables like nobody's business," Marina says. "And since my daughter doesn't have a job anymore, she has no health insurance. None of us do. So the only thing we can do is try to keep healthy by putting good food in our bodies." She leaves with a bag of fresh produce she says will be a huge help in trying to give the children balanced nutrition.

To Michael Flood, president of the Los Angeles Regional Food Bank, stories like Marina's are the crux of the crisis. "I can't tell you how many people say to me, 'I used to be a donor. I used to be on the other side of this line. I never thought I'd be standing in line in a food pantry, needing assistance,' " Flood says.

Organizations like the L.A. Food Bank and Angel Harvest may get even more help later in the year, if Huizar has his way. He'd like to expand the effect of the surplus food ordinance beyond city agencies into the private sector. Already his office is distributing pamphlets that will explain that the state and federal Good Samaritan laws shield businesses that want to donate food from potential litigation. (Angel Harvest's Palit says that in the 15 years they've been recycling prepared food, "nobody's gotten sick, and nobody's sued. Ever.")

Huizar is also working on a sticker that restaurants and caterers can place in their windows that announces they recycle usable food. He hopes this will be a value-added draw for diners, who may choose a restaurant not only for its menu but for its practice of donating food to people in need.

Eventually Huizar hopes businesses will donate usable edibles as automatically as they now recycle paper, glass and plastics -- something considered innovative when it was introduced. He knows the strained economy has meant contributions to food banks are down, but he believes the bigger problem is distributing those contributions in a timely manner so none of them go to waste.

"Yes, the demand has increased. Yes, the supply has diminished," he admits, "but there's still enough supply. We just have to make a better connection between people who have it and people who need it." 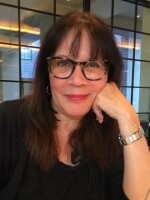 Karen Grigsby Bates
Karen Grigsby Bates is the Senior Correspondent for Code Switch, a podcast that reports on race and ethnicity. A veteran NPR reporter, Bates covered race for the network for several years before becoming a founding member of the Code Switch team. She is especially interested in stories about the hidden history of race in America—and in the intersection of race and culture. She oversees much of Code Switch's coverage of books by and about people of color, as well as issues of race in the publishing industry. Bates is the co-author of a best-selling etiquette book (Basic Black: Home Training for Modern Times) and two mystery novels; she is also a contributor to several anthologies of essays. She lives in Los Angeles and reports from NPR West.
Sign up for our newsletters!
Keep up with all the latest news, arts and culture, and TV highlights from KPBS.
LATEST IN PODCASTS
LATEST IN EVENTS
LATEST IN TV HIGHLIGHTS
Election 2022: Live results
Explore all national, state and local returns now.
See results →
More News