What Are Your City Leaders Making?

Months ahead of state efforts to post municipal employee’s salaries online, KPBS has gathered salary data for the mayors, city managers and City Council members of all 18 cities in San Diego County. We've compared salary information to population in the map and charts below.

You can also see our breakdown of what city leaders cost to each resident annually here.

Click on the markers to see what city leaders are earning.

What Are Your City Leaders Making?
Months ahead of state efforts to post municipal employee’s salaries online, KPBS has gathered salary data for the mayors, city managers and City Council members of all 18 cities in San Diego County.

In San Diego County, only the mayors of San Diego and Chula Vista make more than $100,000. Those cities have 1.3 million and 223,000 residents, respectively.

Poway and Imperial Beach, which are closest in size to the city of Bell, pay their mayors around $13,000 a year.

Only three cities in the County have full time mayors: San Diego, Chula Vista and National City. The highest salary, $118,000, goes to the mayor of Chula Vista.

When considering councilmembers' salaries, it is important to note that San Diego is the only city where councilmembers officially work full-time. For that, they receive $75,000 a year. Other councilmembers make from $47,000 in Chula Vista to less than $4,000 in the small city of Del Mar.

Councilmembers' salaries are sometimes augmented by extra pay for attending meetings of separate committees and commissions.

Jessica Levinson is the director of political reform at the Center for Governmental Studies in Los Angeles. She says salaries alone leave out a crucial factor: benefits.

“Salaries can represent a relatively small proportion of what employees take home,” Levinson said. “That’s why I think it’s vitally important to disclose in an accurate, digestible and comprehensible way what city officials are taking home as a result of their job.”

Levinson says she hopes the State Controller John Chiang will reveal benefits as well as salaries on his website. She says guaranteed pensions, free health care and perks like free cell phones and travel money can make holding public office more lucrative than it appears.

KPBS did collect information on benefits, but the benefits vary so widely across cities in the County that they are not included in our tables.

Data was originally embedded within interactive charts but the data was lost after Swivel went out of business.
Politics

Alison St John
Alison St John currently serves as a general assignment reporter and occasionally co-hosts KPBS Midday Edition. She fell in love with KPBS Radio when she arrived in San Diego in 1985 and first heard NPR. She has been a voice on KPBS Radio since 1989, and has served as a news reporter for radio, TV and the web, as well as anchoring, hosting, producing and editing. Alison has reported on stories about North County and was based in the KPBS' North County Bureau. Alison covered the metro beat during the critical period of the San Diego City pension crisis, and the education beat while Alan Bersin was the controversial Superintendent of San Diego City School District. She covered health when the industry was converting to managed care and told welfare reform stories in the late 1990s when Clinton was “ending welfare as we know it.” She has covered land use issues extensively, looking at the challenges of meeting a growing population while preserving community character, and developing a better transportation system to meet environmental concerns. She has done many stories on the military in San Diego, and the series she edited on the challenges veterans face returning from active duty to civilian life won “Best of Show” from the San Diego Society of Professional Journalists. She occasionally hosts the KPBS Roundtable and KPBS Midday Edition. Alison has won awards from the San Diego Press Club, the Society of Professional Journalists, the Associated Press TV and Radio Association, and the California Golden Mike Awards. Alison was born in Tanzania, brought up in Scotland, and earned her degree in psychology and sociology from Durham University in England. Her postgraduate diploma is in student counseling. She worked in England, Nigeria, Switzerland, Belgium, India, and Japan before moving to the United States in 1981. She now lives in Oceanside and enjoys how her community is growing and changing.

Kyla Calvert
Kyla Calvert is the education reporter forKPBS, producing multimedia content for radio, television and the Web. Kyla began producing web content while working in marketing in San Francisco. She decided to change careers and received a master’s degree in journalism with a concentration in digital media from the Columbia University Graduate School of Journalism in 2009. While in school she freelanced for City Hall and The Capitol newspapers covering New York City and state politics and policy. After completing her degree, she worked as a fellow for Hearst Newspapers on “Dead By Mistake” a nationwide investigative project about medical error. The project received the Society of Professional Journalists’ Sigma Delta Chi Award. Kyla moved to San Diego from Beaufort County, South Carolina where she covered county government for The Island Packet and The Beaufort Gazette.
See stories by Kyla Calvert 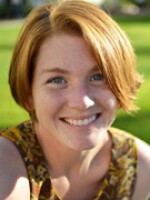 Hilary Andrews
Hilary Andrews has worked for KPBS since 2009 as a student producer and call screener for "Midday Edition," a production assistant for San Diego Week, and a newsroom assistant. Hilary currently attends San Diego State University where she is pursuing Bachelor of Science in zoology and TV & film production. She hopes to eventually earn a PhD in ecology and go on to make wildlife documentaries as a video journalist and field researcher. Hilary is a San Diego native and alumni of Patrick Henry High School. She is currently a member of the academic honor societies Phi Beta Kappa, Golden Key International, Phi Kappa Phi, and Phi Eta Sigma. Outside of work, Hilary enjoys going out on bat surveys throughout Southern California with the San Diego Natural History Museum, photography, taxidermy, making short films and documentaries, and riding her vespa.
See stories by Hilary Andrews
Sign up for our newsletters!
Keep up with all the latest news, arts and culture, and TV highlights from KPBS.
LATEST IN PODCASTS
LATEST IN EVENTS
LATEST IN TV HIGHLIGHTS
More News