A Reminder That War Is Personal

The war in Afghanistan doesn’t touch most of us personally. It’s a conflict thousands of miles away. We occasionally read an article, see a video or hear a story about the 11-year-long war. We’ve heard how all troops will be out by end of next year.

Until then, American troops will continue to be in harm’s way. And for their families it’s more than a passing thought.

On Sunday I attended the deployment ceremony for the 819th Engineer Company of the Arizona Army National Guard. The unit was preparing for a one-year tour in Afghanistan. As combat engineers, their duties include finding and removing booby traps and explosive devices.

Justin Bayles is on his second tour; his first was to Iraq. He’s leaving a wife who is expecting their first child, and a large extended family. He’s 24 years old.

Richard Rainsley is a little older. This is his first tour. His wife will run the household while he’s gone, taking care of their four kids. He says she’s got the tougher job.

They and the rest of the 819th are scheduled back in a year.

As I saw the tears and hugs, I realized how personal this is for so many people.

And I also thought how much we should thank these men and women and their families for the sacrifices they make. 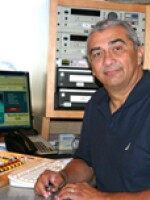 Al Macias
Al Macias (Phoenix) is a veteran journalist with more than 30 years of experience in broadcast news reporting, production and management. He was part of the management team that launched the KNXV newsroom in 1994 and oversaw its growth from a staff of 20 to more than 60 in less than a year. He also served in multiple management roles at KPNX-TV from 1981-1994 and as an assignment editor and manager for KTVK, both in Phoenix.
See stories by Al Macias
Sign up for our newsletters!
Keep up with all the latest news, arts and culture, and TV highlights from KPBS.
LATEST IN PODCASTS
LATEST IN EVENTS
LATEST IN TV HIGHLIGHTS
Election 2022: Live results
Explore all national, state and local returns now.
See results →
More News