Did you know that Comic-Con brings San Diego its highest hotel-room occupancy rate of the year? This is interesting given rumors that both LA and Las Vegas have been courting Comic-Con to move to their respective cities. & The good news is the Convention Center has a contract with Comic-Con through 2012, so San Diego is home to the fan extravaganza for a while longer. 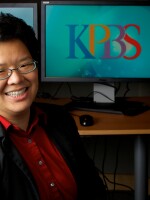 Leng Caloh
Leng Caloh formerly served as KPBS technology & innovation manager, where she oversaw strategy for digital fundraising, online marketing, and analytics. Leng helped oversee the KPBS digital team since its inception in 2006, and led the team through its coverage of the October 2007 wildfires. Leng was responsible for tapping into Twitter and Google Maps during the wildfires, which led to extensive coverage of KPBS' online Web 2.0 innovations and an APTRA Mark Twain Award for Breaking News Online. She was selected by SDSU President Dr. Stephen Weber as one of SDSU's Top 25 people for her work during the wildfires. Leng's career includes producing for both broadcast and online. She spent several years as a producer for the station's daily public affairs television program Full Focus, and has also worked on several national and independent documentaries. She served as KPBS' Convergence Editor, managing a multimedia fellowship program, and helping the station integrate its radio, television, and online platforms. Leng has received a CINE Golden Eagle as well as numerous first place awards for her broadcast and web work from the local Society of Professional Journalists and the San Diego Press Club. Leng served on PBS's Digital Media Advisory Council (DMAC) from 2016-2018, and is currently a member of the Public Television Major Markets Group's Research, Data, and Analytics Committee.
See stories by Leng Caloh
Sign up for our newsletters!
Keep up with all the latest news, arts and culture, and TV highlights from KPBS.
LATEST IN PODCASTS
LATEST IN EVENTS
LATEST IN TV HIGHLIGHTS
More News