For four to eight hours a day, Chris Schranck sits between three computer monitors and a green screen in his one-bedroom apartment in Queens, N.Y. It's his job — live-streaming himself playing video games.

"I think 10-year-old me would be in shock," he says. "I could have never imagined that this is what I would be doing." Hundreds of viewers watch Schranck play video games on the website Twitch — and pay for it.

While video games are the common interest that attracts millions of viewers to Twitch, players often become as big a draw as the game they're playing. And Twitch has been experimenting with ways to take advantage of that.

The latest and broadest expansion yet is Twitch IRL, "in real life." Users can stream video of themselves doing just about anything: shopping for shoes, unboxing new gadgets, singing Christmas Carols.

The latter was exactly what Schranck did when he was visiting family in St. Louis for the holidays. "The party was kind of winding down but there was still some people hanging and kind of singing around the piano," Schranck says. "The light bulb kind of went on. There's the IRL section. I could broadcast this."

Schranck, who is on Twitch under than name Futureman, streamed about three hours of the party — and fans watched.

"I stayed there for the whole thing," says Jake Maddux, who goes by the username Fatality2X on Twitch.

The stream gave Maddux a glimpse into a Christmas celebration unlike his family's, and also let Maddux see a different side of Futureman, an Internet personality he spends so much time watching.

Twitch made a name for itself when it launched in 2011 by letting players stream themselves playing video games live. According to the website, nearly 10 million people visit Twitch every day, outpacing YouTube and other competitors. Its acclaim caught the attention of Amazon, which purchased Twitch in 2014 for $970 million.

Given the popularity of cable networks devoted to people cooking, traveling, decorating houses or making art, "it's kind of unsurprising that people would want to watch each other play video games as well," says Twitch CEO Emmett Shear. "Especially watching really great players."

Schranck isn't one of those great players. Instead, he says, what draws fans is his personality and the community he built around his stream.

"They're coming to my stream to hang with the community, to hear my thoughts on anything and everything and to laugh and have fun and relax," he says.

As Futureman on Twitch, Schranck makes more than his previous job as a second- and third-grade teacher.

Over 17,000 streamers have a deal with Twitch that gives them a cut from the advertising sold on their streams. Fans can also donate directly to the streamers, and some pay a monthly fee for additional perks like access to exclusive chat rooms. According to Twitch, several of its streamers are making more than six figures.

Kevin Tihon lives in Germany and volunteers for Schranck's stream as a moderator, removing offensive and harassing messages from the stream's chat. Part of what draws him to Twitch is the chance to interact with American culture.

"I've always been super interested in English language," Tihon says. "I've read a lot of English books. I've watched a lot of movies in the original English language. So it wasn't that big a jump for me to jump into English conversation."

One danger with loosening Twitch's gaming focus and exposing more of the streamers' real lives is a potential increase in harassment. Even with moderators like Tihon, Twitch has had issues in the past with sexist and racist comments.

"I certainly think there's a bigger moderation challenge with any broader category," says CEO Shear. "It's harder to draw the lines."

While Twitch doesn't pay moderators, the site did introduce a feature to chats to automatically blog messages that included flagged words.

Despite the possible pitfalls, Shear says he hasn't seen anything that's caused him to question IRL's release.

"The community has decided on ways to use IRL that are mostly positive," Shear says. "And so while it is certainly a concern ... it's not something that keeps me up at night."

While Twitch is closely associated with gaming today, the website's roots bear a closer resemblance to Twitch IRL.

In 2007, Shear launched Justin.TV with his former Yale classmate, Justin Kan. The plan was to live stream Kan's life in San Francisco. The website struggled to gain much traction until they allowed viewers to start their own stream.

Out of the random assortment of activities people were streaming, gaming became a clear favorite. Justin.TV re-branded as Twitch in 2011 with a laser focus on only streaming video games.

And, for now, most of the IRL streams look exactly like the gaming streams, minus the games — people sitting in office chairs, in front of screens, talking. Twitch plans to make it easier to live-stream from anywhere by adding functionality to its mobile app later this year.

Ultimately, Twitch IRL is still new, so it may take some time to catch on, says Nicolas Cerrato, co-founder of Gamoloco, a site that tracks what games are being live-streamed. "Even if something is great, it takes a long time for it grow," he says, noting that the early viewership numbers for Twitch IRL "are very encouraging."

Meghan Tobin, aka SinfullyRiddling, starts most of her streams using Twitch IRL. Much of the stream is spent responding to messages from her viewers that appear in a chat bar on the right side of the screen. When she does eventually get to the video games, they function as a backdrop while she continues the conversation with her viewers.

"I think for many people what makes them love Twitch so much is not the game," Tobin says. "When you remove the game you still have those main aspects that they're there looking for."

Andrew Loftus has been watching Twitch for years and he connects Twitch's popularity to an ancient human pastime — people-watching.

"You go to the mall or you go to a department store and you people-watch," he says. "At least I do."

It might sound like geeky reality TV, but the major difference is the lack of editing. Loftus says this can lead to some dry moments, but also some surprising, candid moments enhanced by watching them in real time. And that's part of the addictiveness — the "just five more minutes" mentality, even if those extra minutes go unrewarded.

"So maybe another five minutes," Loftus says. "And it just keeps building and building. And maybe, you know, 20 minutes or an hour later sometime does happen and you're like, 'I knew I should have stayed.' " 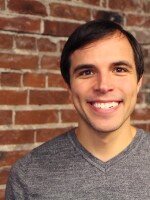 Stephan Bisaha
Stephan Bisaha is a former NPR Kroc Fellow. Along with producing Weekend Edition, Stephan has reported on national stories for Morning Edition and All Things Considered, as well as other NPR programs. He provided data analysis for an investigation into the Department of Veteran Affairs and reported on topics ranging from Emojis to mattresses.
Sign up for our newsletters!
Keep up with all the latest news, arts and culture, and TV highlights from KPBS.
LATEST IN PODCASTS
LATEST IN EVENTS
LATEST IN TV HIGHLIGHTS
More News