San Diego's Superbowl Of Ornithology In Its 18th Year

By Deb Welsh / Morning Edition News Anchor
San Diego's Superbowl Of Ornithology In Its 18th Year
The annual San Diego Bird Festival, now in its 18th year, is called the "Superbowl of Ornithology."

The annual San Diego Bird Festival, now in its 18th year, is called the "Superbowl of Ornithology." Jen Hajj is festival coordinator for the San Diego Audubon Society.

Speaking with KPBS Morning Edition's Deb Welsh, Hajj explained why the four-day event at Marina Village at Mission Bay Park is known as such for good reason.

Hajj: We get people from all over the country who come here for the San Diego Bird Festival. And we have a very large number of species here, both endemic species and migrant. Plus, this is the time of year when those birds want to be here.

Welsh: I know you have a whole slew of activities planned over the next couple of days. Could you touch on a few of the highlights?

Hajj: We have a number of field trips that are going out each day to special places within the county; everywhere from the coast to the mountains, to the Tijuana Estuary, all the way to the North County and the lagoons up there.

Welsh: There's rain in the forecast for San Diego for the next several days, so I'm wondering what birdwatchers do then and don't think I'm crazy, but I've always been curious as to where birds go during rain storms?

Hajj: You know, a lot of birds don't care. They'll be out in the wet and they'll be doing the things that birds always do.

Welsh: The drought in San Diego County and, of course, all of California is believed to play a role in whether birds actually nest. Because conditions have been so dire, some species aren't nesting. Does that potentially effect what you do and your activities in the future?

Hajj: Yes, I think it does. So, we celebrate the rain.

Hajj says rain, or shine, most of the field trips will run as planned. 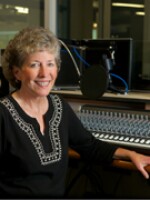 Deb Welsh
Deb Welsh is a familiar name to news radio listeners in San Diego, having been in the market for more than 25 years. Before joining KPBS, Deb worked as a news anchor for KSDO and KOGO News Radio. She was also affiliated with the Copley Radio News Network and had a long association with Peters Productions, Inc. — a national radio syndicator. A graduate of New Mexico State University, Deb has a Bachelor of Arts in journalism. She's been recognized by the Society of Professional Journalists with several awards for spot news/breaking news and team news coverage.
See stories by Deb Welsh
Sign up for our newsletters!
Keep up with all the latest news, arts and culture, and TV highlights from KPBS.
LATEST IN PODCASTS
LATEST IN EVENTS
LATEST IN TV HIGHLIGHTS