Decades of conservation and recovery effort by the U.S. Fish and Wildlife Service and the Navy have biologists claiming what they say is a rare win in their long fight against the effects of human environmental destruction and climate change.

Seventy miles off the San Diego coast lies San Clemente Island — a 21-mile-long largely uninhabited spit of volcanic rock thrust up from the ocean floor millions of years ago.

The U.S. Fish and Wildlife Service on Tuesday announced one bird and four plant species — unique to the island — would be delisted from protected status under the Endangered Species Act, a milestone the service is touting as the start of a year-long celebration of the law's 50th anniversary.

The island is the southernmost of California's Channel Islands, but unlike it's well-known neighbor — Santa Catalina Island, about 24 miles away — San Clemente is not accessible by the public.

The U.S. Navy took control of the island in 1934, according to Navy Region Southwest in San Diego, which is responsible for its management. Navy SEALs train there, as do Marine Corps amphibious units. It's also the only ship-to-shore bombardment range still in use by the Navy, where its warships can zero-in shore-based targets for their arsenals.

But the island is also home to rare and unique forms of wildlife — from foxes, birds and lizards to many plant species, according to Navy biologists.

"On this island alone there are 17 plant species that are found nowhere else in the world," said Brian Munson, the botany program manager at Naval Base Coronado. "When a seed or something from the mainland comes out here, it encounters new conditions. And it'll evolve into something new, and that's what's happened numbers of times on this island."

But the habitat that supports these species is fragile, Munson said, and when sheep and goats were introduced decades before the Navy took over, it devastated the ecosystem.

"The island was obliterated by non-native grazers," Munson said. "Some of these plants were only known from a single individual. The San Clemente Island bush mallow was only known from one spot — a garbage pile that protected it from the goats."

Other plants survived by growing on the steep canyon and cliff walls that line the island's eastern shore.

The Endangered Species Act — signed into law in 1973 — established regulations the Navy had to follow to manage the island's natural resources. Several island plant and animal species were listed as endangered in the 1970s, forcing the Navy to not only mitigate its impact on those surviving species but work to recover them as well.

Key to this effort was removing the goats, Munson said, and once that was accomplished in the early 1990s, the island began to recover.

"So that plant (Bush Mallow) 30 years ago, known from one location, now we know about 6,000 individuals across the island," Munson said.

Melissa Booker, a Navy wildlife biologist overseeing recovery on the island, said the impact of military activity on the island can and has been mitigated — even in the areas receiving fire from warships.

"There are protected species within the shore bombardment area," Booker said. "The species actually thrive in these areas."

Only 9% of the island receives shelling from the Navy, Booker said, and only at the southern tip. From there, about a third of the island's southern side serves as a buffer zone that's off-limits for most personnel.

The Navy calls this part of the island "SHOBA," short for "Shore Bombardment Area." It's also home to the short shrubs used by Bell's sparrows for nesting.

"We have everything from foxes to shrikes to Bell's Sparrows moving in and out of those areas and utilizing those areas successfully," Booker said.

The Navy had success with recovering island species before, such as the island night lizard in 2006.

The San Clemente Island loggerhead shrike — a small, predatory songbird that catches rodents and insects then impales and stores them on thorns and twigs — remains endangered. The Navy also manages a captive breeding program for the birds on the island. 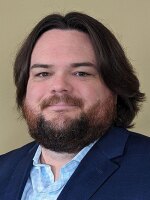 Andrew Dyer
I cover the military and veterans affairs at KPBS. As a veteran who enlisted in the Navy after 9/11, I understand the challenges service members and veterans face because I’ve faced them, too. I’m looking to tell the stories of our local sailors, Marines and veterans and hold government entities accountable when they fail military and veteran families.
See stories by Andrew Dyer
Sign up for our newsletters!
Keep up with all the latest news, arts and culture, and TV highlights from KPBS.
LATEST IN PODCASTS
LATEST IN EVENTS
LATEST IN TV HIGHLIGHTS
More News