Senator Barack Obama returned to the United States today after a quick, highly publicized trip to Afghanistan, the Middle East and Europe. The Afghanistan and Iraq legs were official Senate business; the rest was billed to his presidential campaign. NPR's senior Washington editor Ron Elving joins us now. Ron, thanks very much for being with us.

RON ELVING: Good to be with you, Scott.

SIMON: The upside of the trip would certainly seem to be that Senator Obama certainly looked like a president. Are there downsides?

ELVING: The downside would be that Senator Obama may have been acting a little too much like a president in the judgment of many Americans. Now, of course, Senator McCain was quick to suggest that there was something slightly inappropriate about this, that maybe he was getting ahead of himself a little bit. And the campaign said it looked like a premature victory lap. Now, of course, none of this was about the Afghani or Iraqi legs of the trip. It was all about that big show in Europe and, to some degree, some of the interaction with some of the Middle East leaders as well.

ELVING: Some of that. He seemed to be a little bit too equal on stage with some of these international leaders, particularly perhaps in the news conference with French President Sarkozy. There was a sense that he was standing on an equal footing with them and acting as though he were already the president.

The funny thing, Scott, a lot of this was not in the control of the Obama campaign. And a lot of these politicians that he appeared with, including Malaki in Iraq, Sarkozy in France, wanted very much to associate themselves with Barack Obama because he is enormously popular in their countries. And it was just good PR for them to be seen in those pictures with him.

SIMON: I can remember a time when presidential candidates would go overseas and they were quick to say, as I think Senator Obama did on the plane leaving Andrews, I want to do more listening than talking. But then, if you're just in Berlin for half a day and spend most of it preparing to give a speech and then giving a speech, it doesn't seem to leave much time for this.

ELVING: Certainly not to be listening to the ordinary European or the ordinary Iraqi-stationed soldier or some Marine in Afghanistan. But he did have some time with the troops when he was on the front lines. He clearly did have some time to listen to General Petraeus, who is one of the people Senator McCain was urging him to meet with in Iraq when this whole thing got started. So, not so much listening time with ordinary people perhaps in Europe, but a chance at least to listen a little bit to some of the European leaders he met with.

SIMON: Ultimately, for all the attention it received this week, and perhaps the comparative lack of attention the McCain campaign received, does this count for anything in November?

ELVING: I suspect by November, we'll have moved on to many other things that will have intervened. But it's possible that some of the impression that was created, both positively - and I think you got a good, positive impression in the photographs coming out of Iraq and Afghanistan especially - and also some of this sense of resentment that maybe this young man, Barack Obama, is getting ahead of himself a little bit, may endure with some voters.

Scott Simon
Scott Simon is one of America's most admired writers and broadcasters. He is the host of Weekend Edition Saturday and is one of the hosts of NPR's morning news podcast Up First. He has reported from all fifty states, five continents, and ten wars, from El Salvador to Sarajevo to Afghanistan and Iraq. His books have chronicled character and characters, in war and peace, sports and art, tragedy and comedy. 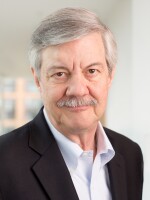 Ron Elving
Ron Elving is Senior Editor and Correspondent on the Washington Desk for NPR News, where he is frequently heard as a news analyst and writes regularly for NPR.org.
Sign up for our newsletters!
Keep up with all the latest news, arts and culture, and TV highlights from KPBS.
LATEST IN PODCASTS
LATEST IN EVENTS
LATEST IN TV HIGHLIGHTS
More News