The American Primitive guitar record is the soundtrack to the open road. It breathes in dust and exhales smoke. Blues, country, rock, psych, drone, folk, ragtime, bluegrass — it encompasses all of them and none at all. But ultimately, it's evocative of a landscape that doesn't know its boundaries. That's why, in particular, 2013 has felt like a 6- and 12-string renaissance that both celebrates and extends this music, especially since the passing of the beloved Jack Rose four years ago.

It's hard to narrow down just five recently released records that exemplify what American Primitive means in 2013. We're barely scraping the dirt floor, especially since the idea has changed over the years. But John Fahey, self-deprecating in the face of founding this music, said it best in some archival footage featured in the lovely new documentary In Search of Blind Joe Death: "I wouldn't worry about calling it anything." 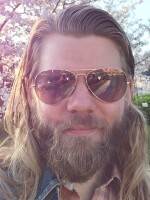 Lars Gotrich
Listen to the Viking's Choice playlist; subscribe to the newsletter.
Sign up for our newsletters!
Keep up with all the latest news, arts and culture, and TV highlights from KPBS.
LATEST IN PODCASTS
LATEST IN EVENTS
LATEST IN TV HIGHLIGHTS
More News