The Soundtrack Of The World's Biggest Street Party

It's a Saturday night at the Mangueira Samba School in Rio de Janeiro, where students are getting ready for Carnival. Millions of people will be dancing to the rhythms of Brazil's most popular music: samba.

Osvaldo Martins, one of the school's organizers, has put together a competition for the best samba-enredo, or samba story. Standing at the edge of the throbbing crowd, he explains that each group vying for a spot in the Carnival parade has to tell a story, kind of like a moving opera.

"And just like an opera, the parade has a plot for the story being told," he says. "With that story in mind, a visual artist will take that plot and will 'carnivalize' it: create the fantasies, the costumes and the floats."

The Mangueira Samba School isn't really a school, but a community organization that spends most of each year preparing for Carnival. There are more than 40 samba schools across Rio, each of which has three to five thousand members. Here at Mangueira, dancers crowd the floor of this warehouse-like building. Four singers are perched on a balcony, and on stage, what looks like about a hundred drummers pound out a parade rhythm.

A samba can be fast or slow; it can propel a parade or insinuate sensuality behind a song. It's the child of African rhythms brought to Brazil by slaves, born in Rio in the late 1800s. The first recorded song to be called a samba was "Pelo Telefone," from 1917.

Today, the type of samba played in Rio's clubs and recorded by most singers is classic or traditional samba, and composers are still writing in that style. One of them is Leandro Fregonesi, who says samba is a complete music genre in terms of rhythm, melody and harmony — it offers a musician limitless possibilities.

"If you have a boy that plays power chords on the guitar to play rock 'n' roll, he'll never play samba," Fregonesi says. "If you get a boy who plays samba and choro [a popular instrumental genre], he can play everything. That's the difference, the richness."

It's that richness and its infectious, feel-good quality that's made samba a popular sound in the clubs of Rio's historic Lapa neighborhood. At the club Carioca da Gema, you can hear today's emerging samba voices perform every night.

Twenty-seven-year-old Julio Estrela lives near downtown Rio. He's been singing in a samba group for the last three years.

Samba is not just for the musicians who work the scene in Rio. Singer Maria Rita is from São Paulo in southern Brazil; she recorded a samba album a few years ago and is about to release a second one this spring. Rita says sambistas expect you to get their music right.

"For the first album that I recorded," Rita says, "I was really scared that I could offend people more than I could add to it. But that didn't happen, thank God. I'd be somewhere and meet a sambista and they're like, 'That was so good you did that, thank you! Do it again!'"

Much has changed since samba came of age in Rio. For decades, the music was a vehicle for black people to integrate into Brazilian society. But over time, samba helped to transform Brazilian culture. Francis Hime, a renowned composer and arranger of Brazilian music, explains that samba is an integrated genre.

"It belongs to everybody," he says. "It not belongs only to Black people, as it was before. Before it was a kind of way of opening the door, for being accepted."

As Noel Rosa, the great composer of sambas in the 1930s, wrote in "Feitio de Oração," one of his classic songs, "Samba doesn't come from the hills, nor the city / Anyone who bears a passion can feel that a samba comes from the heart." 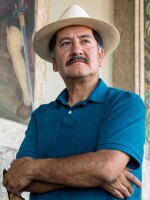 Betto Arcos
Betto Arcos is a freelance music journalist. He writes stories about music from around the world, with an emphasis on Latin America. He has been a contributor to NPR programming since 2009, when he began reviewing music for All Things Considered on the weekends.
Sign up for our newsletters!
Keep up with all the latest news, arts and culture, and TV highlights from KPBS.
LATEST IN PODCASTS
LATEST IN EVENTS
LATEST IN TV HIGHLIGHTS
More News