Kacey Musgraves is magnetic — there are no two ways about it. It's not just that she can sing like a bird and write like a bard. It's the calm charisma that a person who knows exactly who she is and wishes the same for others can't help but exude.

Kacey has spent years getting to this place of cool, collected self-fulfillment, and the journey is evident on her latest studio album, Golden Hour. From growing up yodeling in ten-gallon hats all over Texas — "I used to think it was so dorky," she told me — to breaking the mold for what a woman can achieve in modern country, she has always won by going against the grain.

"I've wanted to do that from the beginning of my artist career, I guess, because there's just such a freedom that comes with that," the musician and producer says. "Once you present yourself as who you are, and kind of make no apologies for it, then you don't ever have to concede to anything else."

Over the past five years, the singer has become known for quick-witted puns and sarcastic, fiery winks in her songwriting. But when it came to writing for Golden Hour, she says she spent more time feeling than thinking.

"I have this competition within myself sometimes to find my personal best, and I know I can beat a line sometimes," she says. "But with this record, I was just like, I should get a little bit more of an aerial view on everything and let the lyrics breathe a little more. I don't need to turn a phrase every time. And I don't need to wrap every single thing up with a little bow."

She found inspiration for the record's title through a little serendipity, having experienced thetotal solar eclipse that took place over America on her birthday last year, Aug. 21, 2017, smack dab in the middle of writing music for this album.

When Kacey Musgraves dropped by World Cafe to perform songs from Golden Hour, she told the story of meeting her husband, musician Ruston Kelly,at a songwriter night in Nashville and explained why country music, "a richly historic genre of songs about life," is to her a perfect canvas for progressive ideas. Hear our conversation and the full performance in the player. 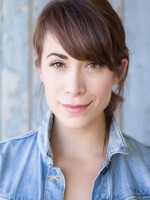 Talia Schlanger
Talia Schlanger hosts World Cafe, which is distributed by NPR and produced by WXPN, the public radio service of the University of Pennsylvania. She got her start in broadcasting at the CBC, Canada's national public broadcaster. She hosted CBC Radio 2 Weekend Mornings on radio and was the on-camera host for two seasons of the television series CBC Music: Backstage, as well as several prime-time music TV specials for CBC, including the Quietest Concert Ever: On Fundy's Ocean Floor. Schlanger also guest hosted various flagship shows on CBC Radio One, including As It Happens, Day 6 and Because News. Schlanger also won a Canadian Screen Award as a producer for CBC Music Presents: The Beetle Roadtrip Sessions, a cross-country rock 'n' roll road trip.
Sign up for our newsletters!
Keep up with all the latest news, arts and culture, and TV highlights from KPBS.
LATEST IN PODCASTS
LATEST IN EVENTS
LATEST IN TV HIGHLIGHTS
More News