A healthy coral reef is a spectacle for the eyes, but it's also a chorus for the ears. Both the vibrant colors and bright sound that coral reefs are known for can disappear when damage occurs, but a new study shows that restoring the reefs can bring those sounds back to life, as well as the larger ecosystem.

Tim Lamont is a marine biologist at the University of Exeter in the United Kingdom. His team used underwater microphones to record reefs in Indonesia. They're interested in what that soundtrack tells us about the health of a coral ecosystem.

"One of the sounds that we know quite well is that high-pitched whooping sound," Lamont says. "That's made by a pretty little yellow fish called the damselfish."

Some of the reefs in Indonesia have been destroyed by dynamite fishing, a practice where people literally blow up reefs with sticks of dynamite in order to catch fish. But the practice leaves the rest of the reef in total wreckage that resembles bleached, faded bones. As the life in the reef trickles away, so does all that vibrant sound like that of the damselfish.

In recent years, the company Mars Inc. — yes, the one that makes Snickers bars — has worked with local communities to restore those degraded reefs. Divers install metal frames underwater. They look like giant metal spiders. And they tie baby corals to the legs and let nature do the rest.

"The corals grow very quickly, and then in the absence of the threat, they're able to recover the damaged area in two or three years," Lamont says.

As Lamont's team reported this week in the Journal of Applied Ecology, when the coral makes a comeback, so does the sound.

"I think what we're hearing is an ecosystem coming back to life," he says.

Along with the whoop-whoops of those damselfish, Lamont says his team has heard a sort of knocking sound that comes from a fish that any Finding Nemo fans will recognize immediately.

"It's a clownfish that makes the sound, and it actually makes the sound by biting together its teeth really, really quickly," Lamont says. "You hear that quite a lot as they talk to each other within the anemone."

Lamont says all that chatter is a beacon that attracts more life to the reef, though some of the new inhabitants remain a mystery, including one fish that makes a sound similar to a foghorn.

"We kept hearing [it] at sunset, but we couldn't work out what fish was making it," he says.

Lamont swam all over the reef, playing back the sound underwater in hopes of finding its maker.

"I got the fish to reply, but I think it must be quite a shy fish that sits in a hole and hides away because loads of the fish do that," he says. "And so I never saw the thing. So the foghorn fish remains a mystery."

Jennifer Miksis-Oldsof the University of New Hampshire was not involved in the work, but she says she was excited to see soundscapes being used to monitor reefs.

"It's been used quite a bit in terrestrial landscapes and restoration, and it's great to see that now being done underwater," Miksis-Olds says.

Lamont points out that climate change still poses an existential threat to reefs worldwide. But if humanity can rein that in, he says the work proves corals can make a comeback and the fish will sing again. 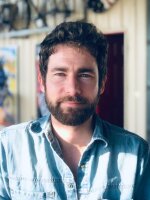 Christopher Intagliata
Christopher Intagliata is an editor at All Things Considered, where he writes news and edits interviews with politicians, musicians, restaurant owners, scientists and many of the other voices heard on the air.
Sign up for our newsletters!
Keep up with all the latest news, arts and culture, and TV highlights from KPBS.
LATEST IN PODCASTS
LATEST IN EVENTS
LATEST IN TV HIGHLIGHTS
More News