How the 'Black Metropolis' made a comeback

In August 1992, community organizer Harold Lucas Jr. peered down a dilapidated street on the South Side of Chicago and tried to envision it in all of its past glory. The distressed neighborhood had once been the soil for a renaissance that blossomed like flowers pushing up through cracks in concrete.

Fleeing the violence and oppression they faced in the South, Black Americans began arriving on these blocks in 1916 as part of the Great Migration. Although they were discriminated against and barred from living in many parts of Chicago, Black migrants, by the 1920s, established a community on the South Side that was brimming with commerce, art and culture.

Originally called insulting names like "the Black Ghetto" by outsiders, the burgeoning neighborhood was rechristened "Bronzeville" by a local newspaper editor in 1930. The name stuck.

In its heyday, Bronzeville offered Black Americans rare opportunities for upward mobility. The ramshackle buildings that Lucas saw in the 1990s had once been Black-owned banks, publishing houses, insurance companies, restaurants, jazz and blues venues. Many Bronzeville residents also made a decent living working in nearby steel mills, stock yards, and factories.

But in the 1950s and 1960s, Bronzeville entered a downward spiral. The advent of large industrial machines and container ships began changing the economic calculus of manufacturing in America's inner cities, and high-paying jobs for blue-collar workers began leaving cities like Chicago, as manufacturers relocated their factories to cheaper locations. Meanwhile, increasingly affordable cars and single-family houses made living in the suburbs more appealing to city families, ushering in an era of urban depopulation and decline.

The government helped facilitate Bronzeville's downturn. It, for example, built the Dan Ryan Expressway through the area, further segregating the community from the rest of the city and literally paving the way for suburbanization. And — in what urban planners now consider a colossal misstep — the government built massive housing projects in the area, including the Robert Taylor Homes, 28 high-rises, each 16 stories tall, which formed the largest public housing complex in the world. Originally pitched as a solution to poverty and residential overcrowding, the Robert Taylor Homes became a national symbol for everything wrong with the projects.

As deindustrialization ravaged the inner-city economy, the situation in Bronzeville got worse and worse. Economic decline led to social decay, and affluent Black residents left the area as it saw an explosion in crime, drugs, and violence. Federal anti-discrimination housing laws passed in the 1960s opened up new neighborhoods for Black people to move to, ironically helping to facilitate the exodus of affluent Bronzeville residents and cementing the neighborhood's decline.

Many forgot the illustrious history of Bronzeville. But not Harold Lucas Jr., who yearned for this formerly vibrant "Black Metropolis" to see a dramatic rebirth. "My heart has a vision of Bronzeville restored," Lucas told the Chicago Sun-Times in 1992.

Incredibly, Lucas's vision came to pass. Not only has Bronzeville seen a dramatic revival over the last few decades, but the community stands out in a new study as one of the roughly five percent of American neighborhoods that had a high rate of poverty in 2000 but has since seen the rise of "inclusive prosperity." The term refers to neighborhoods that saw economic growth and a large reduction of poverty without experiencing what people might call gentrification.

The new study is published by Brookings Metro, and it's authored by Rohit Acharya and Rhett Morris of Common Good Labs, an organization that uses data science to study and improve communities. Acharya and Morris crunch data on more than 3,500 census tracts that had concentrated poverty in 2000 and then track what happened to them.

Some neighborhoods, like, for example, Williamsburg in Brooklyn, saw a large decline in poverty largely because minority groups that once called it home were displaced. The researchers don't see that as a poverty-reduction success story. They wanted to find places that "achieved a large decrease in their poverty rates without displacing their existing communities." And, of the 3,500 census tracts they track since 2000, they found 193 that experienced this positive development by the year 2015. Two of these 193 census tracts are in Bronzeville.

So how did Bronzeville do it?

The Remarkable Turnaround Of Bronzeville

By the early 1990s, Bronzeville had hit rock bottom. The neighborhood had less than half of the population it had back in the 1960s. Its streets had become a no man's land, filled with crumbling infrastructure, abandoned buildings, and vacant lots.

But a group of dedicated community leaders and organizers, including Harold Lucas Jr., banded together to fight for something better. They formed the Mid-South Planning and Development Commission, which offered a comprehensive vision for preserving, developing, and celebrating Bronzeville and its rich history. Their idea was to create a place that championed Black culture; a destination that people would want to visit and live in.

"We need to be unapologetically African-American in planning," Angelo Rose, the chairman of the Mid-South Commission, told the Chicago Tribune in 1994. "In Chinatown, they make no apologies for how (Chinese) their community looks."

Through fierce and sustained activism over many years, Bronzeville leaders got lawmakers and financial institutions on board with their Afrocentric vision for their community's redevelopment. They convinced the city to commit millions to improving infrastructure, preserving historic landmarks, and beautifying the neighborhood. The city also built a new, $65 million police headquarters in the community. The federal government, through the Empowerment Zone program, also spent millions providing tax incentives for development.

And by the mid-1990s, Bronzeville began seeing an influx of so-called "buppies" — Black Upwardly Mobile Professionals — who began buying and renovating many of the area's decaying townhouses and building new houses on vacant lots.

Recognizing how living in concentrated poverty often failed their residents, the Chicago Housing Authority, under the federal government's HOPE VI program, began demolishing public housing high-rises and replacing them with mixed-income developments. The Robert Taylor Homes, known for their extreme, concentrated poverty, gang warfare, dysfunctional heating systems, and broken elevators, had become a poster child for the failures of urban policy. The buildings were torn down, one by one, starting in 1998.

Here's where it's important to note that Bronzeville's subsequent success in reducing poverty cannot be simply explained by the bulldozing of the projects and the relocation of low-income folks. The two census tracts that saw large reductions in poverty in the new Brookings study, co-author Morris says, were not the ones that had large housing projects. Morris and Acharya excluded from their study the census tracts that demolished public housing because their aim was to find places that saw increased prosperity without displacing low-income residents — and, obviously, demolishing public housing and relocating residents confounded that analysis.

"To see two tracts from the rest of the neighborhood experience such positive change is impressive — especially when considering the fact that only 193 total tracts in the entire country experienced large reductions in poverty without community displacement," Morris says.

By 2004, Bronzeville was booming, and a slew of Black-owned businesses started opening shops in the area. And as the district turned a corner and began seeing sustained growth, it had a weapon to prevent displacement: thousands of vacant lots, many of which were owned by the city of Chicago. These lots were both the result of the area's depopulation between the 1960s and 1990s and also the city's demolition of housing projects in the late 1990s.

"The presence of a large number of vacant lots is a common feature of neighborhoods with concentrated poverty," says Morris. For many low-income communities, however, vacant lots are a problem: they're an eyesore, a site for illegal dumping, and a place where crime is at least perceived to be a problem. Vacant lots also fail to generate economic activity and tax revenue.

But Bronzeville's vacant lots became an asset: they have made constructing new housing units cheaper and easier than in many other places, where NIMBYism and fears about displacement often derail political support for new construction.

"Bronzeville demonstrates these vacant lots offer an opportunity for neighborhoods to significantly increase housing density without displacing existing residents," Morris says. "Many other residential areas could follow Bronzeville's path to both reduce the problems associated with vacant land and create housing for new residents."

The area has seen demographic change, especially a significant influx of middle-class Black folks into the area, which has fueled a real estate and development boom. Whether socioeconomic — and not racial — change should be considered gentrification, or whether the process unfolding in the area will inevitably spark gentrification, is up for debate. But Morris and Acharya find that the two Bronzeville census tracts that have seen large drops in poverty also saw a retention of local residents above the national average.

Over the last decade, research has found that relationships and interactions with more affluent folks are crucial for low-income folks to climb the economic ladder. It's an ongoing struggle to ensure that low-income folks can continue affording to live in the area. But, if the community meets this challenge, a Bronzeville with a large population of middle-class Black folks seems poised to give low-income Black kids a much better shot of escaping poverty and achieving their dreams than the distressed Bronzeville of the late 20th century.

None of this would have happened were it not for the fierce determination and vision of community leaders like Harold Lucas Jr — dubbed "the godfather of Bronzeville." Sadly, Lucas passed away at the age of 79 in late August. The Chicago Tribune and Chicago Sun-Times each wrote glowing obituaries about him. Happily, Lucas lived to see the change he helped bring about.

In his elderly years, Lucas served as a community historian, leading bus tours of the area and educating people about the legendary past of Bronzeville. Now Lucas himself is an important part of the community's incredible history. 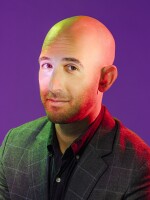 Greg Rosalsky
Since 2018, Greg Rosalsky has been a writer and reporter at NPR's Planet Money.
Sign up for our newsletters!
Keep up with all the latest news, arts and culture, and TV highlights from KPBS.
LATEST IN PODCASTS
LATEST IN EVENTS
LATEST IN TV HIGHLIGHTS
Election 2022: Live results
Explore all national, state and local returns now.
See results →
More News