Men who have sex with men are still, overwhelmingly, the people most affected by monkeypox, according to the World Health Organization. And that's caused some hurdles when it comes to public health messaging about how people can protect themselves. Everything from what we call the virus to offering advice on preventing transmission runs the risk of further stigmatizing gay and bisexual men.

But experts said that in spite of that risk, it's important to keep sex at the front and center of the monkeypox conversation.

"You have to be specific about who's actually at risk, and what are the transmission routes," said epidemiologist Chris Beyrer, incoming director of Duke Global Health Institute.

While it is possible to get monkeypox through ways besides sex, such as touching fabrics that have been used by someone with monkeypox, those instances remain extremely rare. So far in the current outbreak, sexual contact between men remains the primary mode of transmission, which is important to keep in mind, especially during a shortage of vaccines. "In a period of vaccine scarcity, you have to try and use vaccines, to interrupt chains of transmissions," said Beyrer. "It's important to try and contain the outbreak by getting higher rates of population immunity in the networks where this is spreading."

One of the biggest public health challenges has been limiting risky behavior involving sex, said Beyrer. That is, advising queer and gay people to reduce the number of sexual partners and avoid close contact with strangers.

Messaging which harkens back to the messaging of the early HIV/AIDS.

"And people found it to have some kind of elements of homophobia, and anti-sex when sexuality is a very big part of identity," said Beyrer.

How To Have Sex In An Epidemic

Jennifer Brier is a historian of HIV/AIDS at the University of Illinois Chicago. As the debates over how to talk about monkeypox went around – such as does monkeypox count as an STI? How should we think about bad-faith actors calling it a "gay disease" – she pointed back at one of the formative texts of public health, titled How to Have Sex in an Epidemic. Written by two men Michael Callen and Richard Berkowitz, in response to a dearth of information coming from the government.

While the booklet contained direct and detailed information about the dangers of sex during the HIV/AIDS crisis, it first started as a screed titled "We Know Who We Are: Two Gay Men Declare War on Promiscuity."

"And people went banana pants at that article," said Brier. "Like, 'you're attacking gay liberation, that's who we are.' And I understand that at some level. But they were also trying to figure out a model of harm reduction before it existed."

It's a playbook people are still learning lessons from today. Nick Diamond is a co-investigator with RESPND-MI, a community-driven effort to anonymously collect data on sexual networks among queer and trans people in New York City. And in July, in response to a dearth of information about monkeypox from local, state and federal officials, Diamond co-wrote a document titled "Six Ways We Can Have Safer Sex in the Time of Monkeypox."

"I'll be the first to say that we have been leaning on activists from the AIDS response to develop these actions around our response to monkeypox," said Diamond.

But he adds that it's an imperfect line to draw. HIV/AIDS was a much deadlier disease and broke out during a politically different time. That said, Diamond says people still have a hard time talking about queer and trans sex.

"We have to talk about sex when we're talking about monkeypox. I think that these are uncomfortable conversations but it is one of the determinants of our health and rights," said Diamond.

"Our sexual desires and our sexual practices are way more complicated than any phrase can give us," she said. 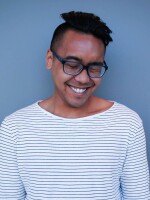 Andrew Limbong
Andrew Limbong is a reporter for NPR's Arts Desk, where he does pieces on anything remotely related to arts or culture, from streamers looking for mental health on Twitch to Britney Spears' fight over her conservatorship. He's also covered the near collapse of the live music industry during the coronavirus pandemic. He's the host of NPR's Book of the Day podcast and a frequent host on Life Kit.
Sign up for our newsletters!
Keep up with all the latest news, arts and culture, and TV highlights from KPBS.
LATEST IN PODCASTS
LATEST IN EVENTS
LATEST IN TV HIGHLIGHTS
Get ready to vote
What questions do you have about the Statewide General Election coming up on Nov. 8? Submit your questions here, and we'll try to answer them in our reporting.
Launch →
More News