Can the hurricane TV reporters come inside now? Please?

When I saw a tree branch fly into The Weather Channel's intrepid anchor Jim Cantore, just as he was struggling to stand up against intense winds reporting from the middle of the storm during Hurricane's Ian's landfall Wednesday, I couldn't help a fleeting, terrible thought:

As a longtime Florida resident, this is a sight I've been forced to endure for many years, as I scour TV news coverage for information about my home during a hurricane: Reporters standing in high winds and pounding rain, shouting their observations about the experience of being inside a deadly storm to an audience of millions.

Cantore seemed to be among the most daring of the correspondents I watched offer this kind of reporting Wednesday, which included experienced and accomplished journalists like Bill Weir on CNN, Kerry Sanders on NBC and Steve Harrigan on Fox News Channel.

The storm surge from Hurricane Ian is the “crazy variable here right now," says @BillWeirCNN from Punta Gorda, Florida. “This is exactly what climate scientists have been warning about for a long time.” https://t.co/qPONcBnBLv pic.twitter.com/aJDunN7Uzc

Reporting for The Weather Channel, Cantore is a storm chasing legend and he didn't disappoint during reports on Ian, holding onto a street sign while the wind bent back a stop sign. He shrugged off the danger once he regained his footing, heading to a safer spot to continue his reporting.

I get why this happens. Not only are these powerful visuals, but they help break up the monotony of watching a slow-moving storm deliver the same kind of damage to communities all across Florida's Gulf Coast. Hurricane coverage can take on an awful rhythm; the meteorologist offers an overview of the storm's progress, local officials talk about efforts to safeguard their communities, reporters on scene gaze at the wind and rain and document the destruction.

And you hear the same warnings: Don't walk or drive through flooded areas. Don't expect emergency services to respond until the storm passes and winds die down. A newer slogan, which I heard repeated by several meteorologists and news anchors like a mantra:"Hide from the winds; run from the water."

Watching a person stand in the middle of the maelstrom adds drama to a sadly predictable situation. And, as one of my more unconventional social media followers noted, it can feel a bit like watching a NASCAR race, where you both fear and are attracted by the possibility that you might see something terrible happen in real time.

We do need journalists on scene to witness how a storm like Ian dismantles communities in Florida. But do those reporters really need to risk their lives standing out in open rainfall and wind gusts? Watching a bit of Shepard Smith's CNBC show, I saw him report on Ian by talking to a longtime Florida meteorologist – now retired – and residents in affected areas who were indoors. I didn't feel like I was missing much.

It's tough to send a message that people in affected areas should hunker down at home, when TV channels are filled with footage of reporters out in the driving storm, pointing out striking weather moments.

Anderson Cooper's CNN show featured a report from a journalist from at a Florida station noting he was able to stand in the elements because he was next to a sturdy fire station. Still, it's tough to send a message that people in affected areas should hunker down at home, when TV channels are filled with footage of reporters out in the driving storm, pointing out striking weather moments.

I wasn't in the hurricane as this was taking place; I had traveled to Atlanta from my home in St. Petersburg after a mandatory evacuation was declared, fearful of getting caught in a flood with my 13-year-old dog. So the TV reports were a lifeline to friends, family and my neighborhood; I really didn't want to see someone get seriously hurt in a place that I love doing something no one in a hurricane should be doing.

This is an old debate and one the TV news industry seems to have already decided. Cantore stumbling on a tree branch won't be enough; until a reporter is seriously injured doing this kind of reporting, it will continue. And I will always wish they were more careful. 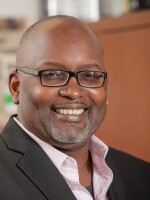