By Tristan Ahtone / Poverty and Public Health Reporter
Medicaid Expands Choices For Native Americans In New Mexico
Around 25,000 Native Americans in New Mexico will become eligible for Medicaid when the Affordable Care Act goes into effect next year. The change translates to more money for the Indian Health Service. But Medicaid expansion will also force Native health providers to deal with something they’ve never faced before: competition from non-tribal health programs.

Around 25,000 Native Americans in New Mexico will become eligible for Medicaid when the Affordable Care Act goes into effect next year. The change translates to more money for the Indian Health Service. But Medicaid expansion will also force Native health providers to deal with something they’ve never faced before: competition from non-tribal health programs.

New Mexico has one of the largest Native American populations in the nation, and nearly 40 percent of that population currently lacks health insurance. Take John Armijo, for instance. He’s an enrolled member of the Pueblo of Jemez located in central New Mexico. When he learned he would be eligible for Medicaid in 2014, he says it came as a relief.

“I was thinking ‘oh god, this will be great’ for me, one of the baby boomers and my fellow tribal members,” Armijo said. “It’ll be a great thing and if that happens, I won’t have to wait for the retirement age to have these services.”

Armijo is three years shy of being eligible for Medicare, works part-time for the U.S. Forest Service – which doesn’t provide him with insurance – and makes just enough money to be ineligible for Medicaid. However, next year, when the state expands its Medicaid program, Armijo will have coverage, and choices.

“If my health deteriorates or goes bad I’ll be looking for other services,” Armijo said. “Like, special doctors or special hospitals.”

Like many Native Americans, Armijo has received medical care through the Indian Health Service, or IHS, for most of his life. The IHS system provides free, basic services to tribal citizens and pays for more complicated procedures it can’t handle at other facilities.

If there’s enough money to pay for it.

According to Jay Steiner, with the National Council on Urban Indian Health, current federal funding for IHS is estimated to be at about one-quarter of need.

“So because of the underfunding of the Indian Health Service, there isn’t the capacity to provide a lot of the services that our patients require,” Steiner said.

Think of IHS’s finances like a pie. Or a quarter of a pie, if we keep in mind the service is funded at 25 percent of need. Now take that pie slice, and divide it between 612 hospitals, health centers and clinics across the nation. In states where Medicaid expansion is happening, like New Mexico and Arizona, more Native Americans will have access to that federal health insurance plan. That means when they show up at an IHS facility, IHS can bill Medicaid for services instead of paying out of pocket.

“What were hoping is that we can take advantage of additional revenues made available by the expansion of Medicaid to make up for that shortfall somewhat,” Steiner said.

But with insurance comes choice. Once a tribal citizen has Medicaid dollars in hand, they can take their business wherever they want.

“We realize that as people get insurance they have more choices,” said Linda Stone, CEO of First Nations Community Health Source, an Urban Indian Clinic in Albuquerque. “That for us could mean that some of our patients will seek care elsewhere.”

In rural areas of the state, the challenge of competition may not be as fierce, since hospitals and health centers are often few and far between. However, in a city like Albuquerque, First Nations Community Health Source has a number of competitors just blocks from its location.

“We don’t know what it’s really going to look like but we do know that it’s always a possibility that yes: there is going to be competition,” Stone said.

Not only competition, but perhaps even less funding for the IHS. Jim Roberts is a Native American Health Expert with the Northwest Portland Area Indian Health Board.

“There could be a mindset that would evolve in Congress that ‘why should we continue to fund the Indian Health System when you have access to Medicaid and you have access to the insurance exchange market? You should go there to receive your care,’” Roberts said.

Still, Roberts estimates that nationally, the Medicaid population in the IHS system could double next year. That’s because many members, like John Armijo of Jemez Pueblo, will likely continue bringing their medical needs and Medicaid dollars to their local providers.

“I rather come here first, than rather go outside,” Armijo said. “This is my hometown, and the reservation I live on, I’m a tribal member, and I like to help the health center here first.”

And with Armijo’s Medicaid dollars flowing to IHS, better programs, new hires and expanded services may be on the horizon. 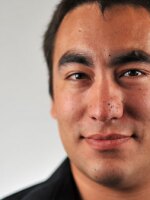 Tristan Ahtone
Tristan Ahtone is a member of the Kiowa Tribe of Oklahoma. He’s also German and English and a few other dashes of European (just to make things more interesting). Before becoming a reporter, Tristan held a number of exciting jobs, such as door-to-door salesman, delivery driver, telemarketer, secretary, janitor, busboy, and office clerk to name a few. In 2006, Tristan graduated from the Institute of American Indian Arts with a bachelors degree in Creative Writing. In 2008, he received a masters degree in broadcast journalism from the Columbia School of Journalism. Since 2008, Tristan has specialized in covering Native American, environmental and healthcare issues, and has worked with The Newshour with Jim Lehrer, National Native News, Frontline, Indian Country Today, Sirius Satellite Radio and NPR. Before moving to the southwest, Tristan worked as Morning Edition Host and Reporter for Wyoming Public Radio. He currently serves as KUNM's Poverty and Public Health Reporter.
See stories by Tristan Ahtone
Sign up for our newsletters!
Keep up with all the latest news, arts and culture, and TV highlights from KPBS.
LATEST IN PODCASTS
LATEST IN EVENTS
LATEST IN TV HIGHLIGHTS
Get ready to vote
What questions do you have about the Statewide General Election coming up on Nov. 8? Submit your questions here, and we'll try to answer them in our reporting.
Launch →
More News