Leadership from the U.S. Department of Veterans Affairs answered questions at a congressional hearing Wednesday about inewsource’s investigation into dangerous liver research conducted at the San Diego VA and poor oversight of the VA healthcare system.

The congressional inquiry was the first public opportunity to hear from VA leaders about San Diego whistleblowers’ allegations, which were first made in 2013. inewsource has reported on their claims over the past year, but the VA had only provided brief statements saying the department was looking into the matter.

Listen to this story by Brad Racino.

The House Committee on Veterans’ Affairs conducted the hearing to confront VA leaders about patient harm in the VA healthcare system, referencing examples of misconduct at veterans medical facilities around the country.

Rep. Scott Peters, D-San Diego, acknowledged during the meeting that “there's a lot of fine work going on at the VA,” but it’s the nature of the committee to examine things that aren’t going well. He then recounted accusations from San Diego whistleblowers that unethical liver biopsies were performed on ill veterans without their consent at the La Jolla VA hospital, and he asked VA leaders to address how they handled the whistleblowers’ claims.

“This story presents a case that could have consequences in other settings, especially for VA medical centers that conduct research on-site,” Peters said during the hearing.

The VA investigated the claims in 2017 and found “no substantial danger to public health” had occurred. But when the case was reviewed by an independent agency called the Office of Special Counsel, it concluded the investigation was “unreasonable” and urged the VA to take a “truly critical look” at what happened in San Diego.

Dr. Gerard R. Cox, the VA’s deputy undersecretary for health for organizational excellence, said the VA had completed a second investigation into the San Diego whistleblowers’ claims, which “substantiated that there was egregious research misconduct.” He said the VA submitted a second report to the independent special counsel’s office, which is reviewing it. The report has not been made public yet.

“Finally to have them substantiate it and to say that there were egregious violations was a good thing after so long,” said Martina Buck, one of the two whistleblowers from the San Diego facility, after watching the hearing. Buck has spent seven years raising concerns about the liver research. “Finally finally, finally (they found) that the two of us were correct.”

Buck was terminated from her position as a VA researcher in 2018, allegedly as retaliation for bringing her concerns to management. She told inewsource Wednesday that “like the patients that were harmed, the consequences to the whistleblowers need to be remedied.”

“Who's taking care of that?” she asked.

Cox said the reason the VA’s initial investigation didn’t uncover the misconduct was because “at least one key witness was not truthful, was not forthcoming with information.” He did not say who that witness was.

The research, led in part by Dr. Samuel Ho from at least 2014 to 2016, involved collecting liver tissue, blood, stool and urine samples from patients suffering from alcoholism and liver disease to better understand their condition.

An internal report from the San Diego VA obtained by inewsource in February confirmed extra liver samples had been taken from the veterans during biopsies that were not necessary for their clinical care — they were only taken for research purposes. The patients were not informed that this increased the risk of severe complications, including internal bleeding.

“There is no question that it is malpractice in my view,” said San Diego VA liver clinic director Mario Chojkier, the other San Diego whistleblower. He is also married to Buck.

“Obtaining additional pieces of liver without authorization by the regulatory group ... and from each patient is a gross violation of the essential ethical rules of human research and clinical practice” Chojkier said. “It's medical assault, unequivocally in certain counts with premeditation, and malice, for profit and prestige.”

The investigation into the liver research was led in part by the VA Office of the Medical Inspector, which oversees the VA healthcare system, a network providing services to 9 million veterans at 1,255 facilities around the country. 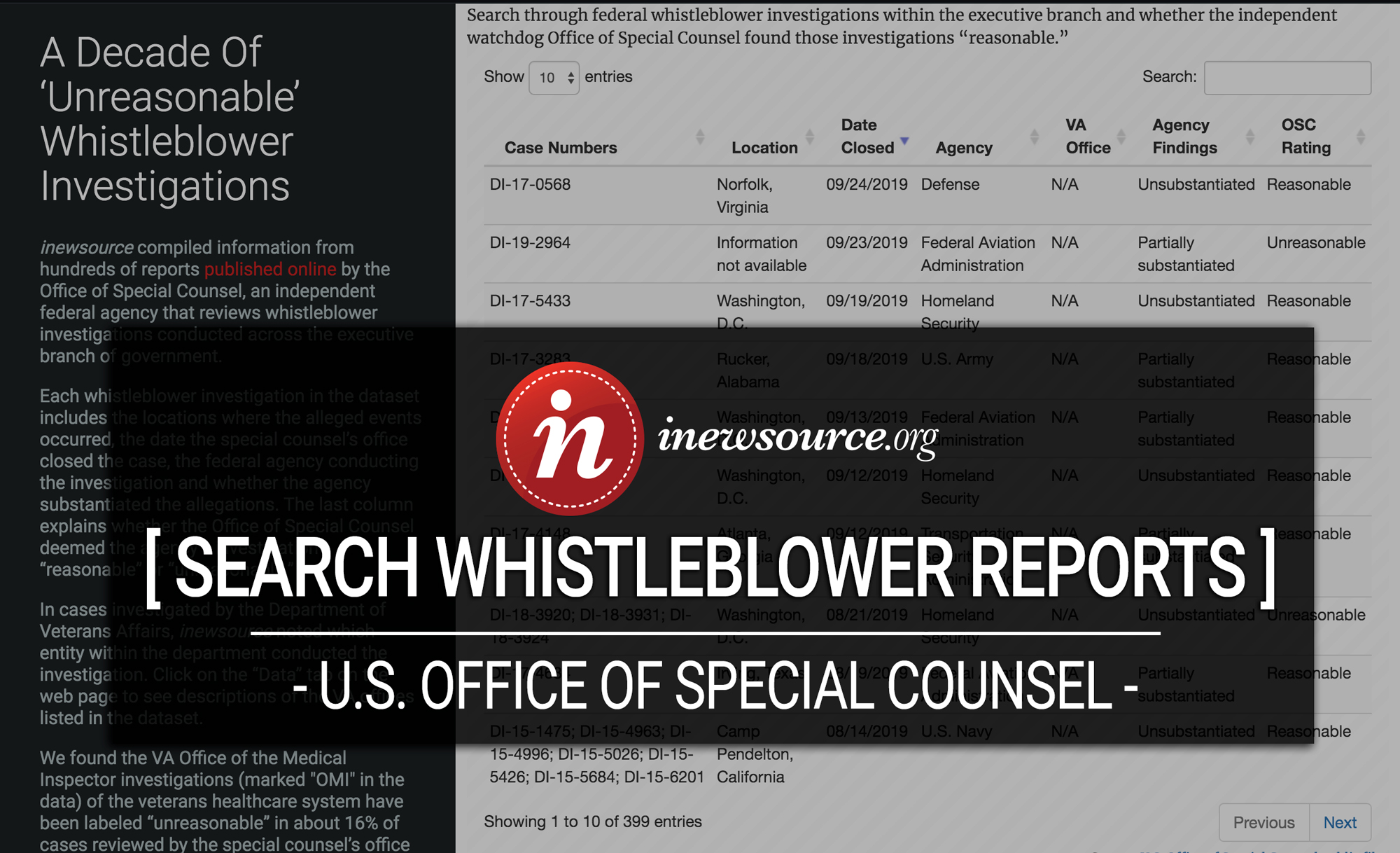 Click here to search the inewsource database of federal whistleblower complaints within the executive branch.

Yes, said Cox, who is also the former interim director of the medical inspector’s office. He added that the VA “conducted our own analysis of the rate at which the Special Counsel of the United States finds our reports are not reasonable. We came up with a very different number.”

Cox said only 5% of the VA’s investigations are labeled “unreasonable,” compared to inewsource’s much higher estimate.

Before publishing the article, inewsource sent its findings to the VA for review. In response, spokeswoman Christina Mandreucci said the analysis was “misleading and ignores key information,” saying the VA’s estimate was 5%. But after she was sent a detailed methodology behind inewsource’s numbers on Sept. 18, she did not respond to questions or explain her statement.

When asked again to explain the VA’s own data analysis after Wednesday’s hearing, Mandreucci responded over email. She said the reason for the discrepancy was: “You counted each individual whistleblower as though he or she represented a separate case.”

But Mandreucci is incorrect. inewsource’s detailed methodology, which she has been given, stated that whistleblowers were grouped together if they reported the same allegations.

inewsource is an independent investigative journalism organization embedded in the KPBS newsroom. It is a nonprofit 501(c)3 supported by foundations, philanthropists and its own separate membership base.

A Hard Look At How We Police

The Talk - Race In America

Two Arrested In Santee On Suspicion Of Pointing Gun At Protesters