School Districts Try to Make Up for Cuts

Schools across the Southwest are opening this month with smaller budgets and fewer resources, forcing districts to come up with creative ways to make up for huge monetary losses.

The budget for public schools in Arizona has shrunk by more than 25 percent over the past three years. It's down $1.6 billion. To make do, districts have frozen salaries, stopped buying new textbooks, and started charging fees to play sports. But superintendent Kent Scribner, with the Phoenix Union High School District, says these changes, while helpful, still don't address where education budgets really bleed. 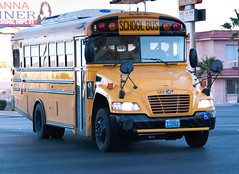 The Clark County School District will save around $10 million by making school bus routes more efficient.

"Eighty-five percent of all school districts' expenditures is people," Scribner said. "We're in the people business. So as we begin to balance our budget, we do that by shrinking in size."

Specifically, Scribner will shrink the number of hours substitute teachers work. Instead, he will be subbing, along with the other administrators, five full days this school year. The district is also requiring teachers to cover their co-workers' classrooms up to eight times, without pay.

Ed Bufford, the president of the Classroom Teacher's Association, says that teachers are, predictably, "not happy about it."

"But," he went on, "when you have $12.5 million virtually each year for four years that need to be cut from the budget, you get to the point where you've got the maximum number of students you can have in each class, you've got the staffing as tight as it can be possibly, and you still can't get by without cutting more from the budget."

From the outset, Bufford's goal was to keep teachers employed who were performing well and wanted to stay with the district.

"A lot of people I'm sure would say, boy you really had to get creative to come up with something like this where the teachers would sub eight times for free in order to save money," Bufford said. "But we agreed to put that out to a vote, and it did pass."

Both Scribner and Bufford agree that in addition to fiscal relief, the new substitute policy might also create a healthy trepidation for students -- some of whom will walk into class this year and find their superintendent as their new substitute teacher

But another way the district will make up its deficit this year is through more efficient bus routes. When school starts, almost every bus will service three schools in the morning and three in the afternoon. To make the new routes work, almost 180 schools will adjust their schedules.

"So the idea is by changing some start and end times we are able to service more schools and more students with actually less buses and drivers," said Jeff Weiler, the chief financial officer for the school district.

Weiler said the change will save $10 million.

"Comparing that to having to raise class size or cut other instructional programs, that seemed a much more, well less disadvantageous to schools," Weiler said.

So Las Vegas parents and students are getting ready for school, and new school schedules. At a recent back to school fair, some parents were excited about the change.

"It's win win," said Mike Holden, a single dad who works the graveyard shift as a card dealer at Harrah's casino. For Holden, sending his second grade daughter to school an hour earlier will be better for his routine. Furthermore, he believes saving money on buses is a good deal if it spares more teacher layoffs.

"Saving jobs, getting parents like me an extra hour sleep. Oh yeah, that is fantastic," Holden said.

But mother Audrey Rangel is upset that the changes mean her sons will be dismissed from elementary school an hour earlier.

"They leave the school at 2 p.m.," Rangel said. "And for parents that work, that is horrible."

Rangel will likely have to a pay a daycare $20 a day to watch her first and fourth grader after school.

In fact, some public schools have become dependent on parents paying out of pocket in San Diego.

Debbie O'Toole and her family live in a middle-class suburb north of San Diego. Sitting at a local coffee shop, O’Toole talked about how much schools have changed since her generation.

"When my oldest was in kindergarten, we actually had a teacher's aide,” said O’Toole. “I just made some assumptions, that things were going to be the same as when I was in San Diego city schools."

But in the last five years, funding for all schools has fallen. That prompted O'Toole to start asking local businesses for money. In 2008, she raised $100,000 for her youngest boy's elementary school. This year, she collected $60,000, by soliciting businesses that are typically hired for services by the school to give back.

"I went to the people whom we actually give money to, like the school photographer and the gift shop businesses,” said O’Toole. “Other than that, we're having to reach out further and further away from our area."

O'Toole showed a letter she had just received from her kid's school to Sally Smith, another local mom and attorney who follows the issue of school funding closely. In that letter, the school asked parents like O'Toole and Smith for money for extra-curricular activities and equipment, like cheerleading outfits, and science lab kits.

“There are parents who work so hard to raise money,” said Smith. “They're trying to do it in an economic climate in which the people they're trying to get donations from simply can't afford it."

This may actually be illegal: the very act of schools soliciting parents for money.

Currently, Smith is part of a statewide effort to pass a law which would ban schools from denying poor kids the same benefits given to those with more money.

Devin Browne
Senior Field Correspondent Devin Browne (Phoenix) was born and raised in a small suburb of Los Angeles known nationally for its natural disasters (fires, mudslides, and earthquakes, mainly). In 2008, she moved into the heart of the city, to one of L.A.'s most bustling immigrant portals. There she launched MacArthurParkMedia.com, a site about how the American experience now starts. A more personal account of her time in MacArthur Park, living with a Mexican family, can be found on the-entryway.com. She graduated from the University of Michigan in 2005, and later studied radio at the Salt Institute for Documentary Studies in Portland, Maine. Her stories have aired on Marketplace, The Environment Report, and PRI's The World. She has also written for LA Weekly.
See stories by Devin Browne

Ruxandra Guidi
Ruxandra Guidi was the Fronteras reporter at KPBS, covering immigration, border issues and culture. She’s a journalist and producer with experience working in radio, print, and multimedia, and has reported from the Caribbean, South and Central America, as well as the U.S.-Mexico border region.
See stories by Ruxandra Guidi

Jude Joffe-Block
Senior Field Correspondent Jude Joffe-Block (Phoenix) caught the radio bug while assisting a radio reporter in Mexico, and has been happiest wearing headphones and pointing microphones ever since. She initiated Fronteras Desk coverage in Las Vegas as the project's first Senior Field Correspondent there. She then joined the Phoenix newsroom in July 2012. Previously, she contributed stories on immigration and criminal justice to KALW in San Francisco and multimedia content in both Spanish and English to the Associated Press in Mexico. She is a graduate of U.C. Berkeley's Graduate School of Journalism and Yale University, and was a Fulbright Scholar in Mexico.
See stories by Jude Joffe-Block
Sign up for our newsletters!
Keep up with all the latest news, arts and culture, and TV highlights from KPBS.
LATEST IN PODCASTS
LATEST IN EVENTS
LATEST IN TV HIGHLIGHTS
Get ready to vote
What questions do you have about the Statewide General Election coming up on Nov. 8? Submit your questions here, and we'll try to answer them in our reporting.
Launch →
More News