When North Korea announced the test explosion, it did so in a statement from the Korean Central News Agency.

And while the subject of the statement was deadly serious, the language sounded a little peculiar to native English speakers.

Unidentified Man: The nuclear test was conducted with indigenous wisdom and technology 100 percent. It marks a historic event, as it greatly encouraged and pleased the Korean People's Army and people that have wished to have powerful, self-reliant defense capability.

BRAND: Where does North Korea get its quirky diction?

CHADWICK: Well, that's a question for the explainer team at the online magazine Slate. And here is Slate's Andy Bowers with the answer.

Mr. ANDY BOWERS (Slate Magazine): It's homegrown. For the most part, North Korean government officials learn English without ever leaving the country. The political elite study at the language program of Kim Il-sung University, while most working-level diplomats train at the Pyongyang University of Foreign Studies.

The teachers at these programs tend to be North Koreans who use video and audio recordings as class aids. There are very few English language books around. Students are often forced to study from volumes of sayings by the country's founder, Kim Il-sung, that have been translated into English.

A few top students get to travel abroad or watch Hollywood movies like Jaws and Titanic.

Kim Il-sung founded the Central News Agency as a political party mouthpiece in 1946, before the official creation of the Democratic People's Republic of Korea. The Newhouse News Service reports that in the 1970s, the KCNA would run paid ads in American newspapers like the Washington Post, containing fawning interviews with Kim Il-sung. Then it would turn around and claim that the Washington Post had praised the so-called great leader.

The agency also has its own Web site run out of Japan. It makes frequent use of strange and extravagant rhetoric. In 1998 it said:

Mr. BOWERS: It went on to promise that the Americans will:

Mr. BOWERS: Foes of the state are often described as human scum. One defector was further called a:

Mr. BOWERS: Despite its peculiarity, the North Korean news service provides the West with an important source of information on Kim Jong Il's regime. American and South Korean analysts read the KCNA releases every day, looking for subtle shifts in rhetorical strategy or other clues as to what might be going on inside the country.

As a rule of thumb, it's more likely that the North Koreans mean business when they tone down the name-calling. 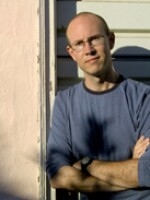 Andy Bowers
Andy Bowers oversees Slate's collaboration with NPR?s daytime news magazine, Day to Day. He helps produce the work of Slate's writers for radio, and can also be heard on the program.
Sign up for our newsletters!
Keep up with all the latest news, arts and culture, and TV highlights from KPBS.
LATEST IN PODCASTS
LATEST IN EVENTS
LATEST IN TV HIGHLIGHTS
Get ready to vote
What questions do you have about the Statewide General Election coming up on Nov. 8? Submit your questions here, and we'll try to answer them in our reporting.
Launch →
More News