For Afghan Soldiers, A Battle For Respect

Last month, the Taliban carried out their largest coordinated attack across Afghanistan, including three sites inside the capital Kabul. It took an 18-hour gunfight to end the assault.

But even as they took cover, Kabul residents saw something new: their own soldiers taking the lead, with limited help from NATO. Television footage showed Afghan soldiers moving confidently into the building where the militants were holed up, avoiding reckless gunfire that might have endangered civilians in the crowded city.

Afghan troops appear to be slowly winning the respect of their population, as they take a more prominent role in security operations. At the same time, Afghan soldiers say they are not getting the same respect from the government they're fighting for.

"If we don't send our sons to be police officers and soldiers, then who should protect our land and our honor?" asks Jabar Khel. "Should we depend on the Americans? No."

But a steely sadness tempers Jabar Khel's pride. His 28-year-old son, Zamman, died in the building as part of an Afghan SWAT team. Two years ago he lost another son — an army colonel — to a Taliban ambush.

If all my boys are killed serving God and country, so be it, says Jabar Khel, who has three more sons in the military.

Afghan commanders say their soldiers and police don't always win medals, and stories of valor don't always make the paper. But there are plenty of stories.

Abdul Rizaq, 22, says he joined the police to serve his country -– but mostly to support his family with the $240 monthly salary. Two years into his work in Paktika province, he joined Afghan soldiers on a mission to capture a Taliban commander in the town of Yahya Khel. The attack ended with Rizaq kicking a grenade out of the enemy commander's hand before the man could pull out the pin.

Rizaq says he threw himself on top of the insurgent, and his partner helped cuff him. He did get a commendation for the arrest, but Rizaq and his comrades are under no illusions -– they say there is little compensation for what they do — and plenty of risk.

Amanullah Ahmadzai, a 27-year-old Afghan army veteran, is also from Paktika. On his very first mission, his convoy hit a roadside bomb.

Ahmadzai had one eye to his gun sight; the shrapnel hit his other eye. There was no ambulance with the Afghan convoy. The Americans eventually helped get him to a hospital, but it was Kabul's then-notorious military hospital. In years past, patients there brought their own food or faced starvation. They paid bribes to get medical treatment.

Doctors operated on Ahmadzai's eye — without anesthetic. He eventually spent twice his military severance pay to get treated in neighboring Pakistan.

But now, Ahmadzai says, he can't get a job and his disability pension doesn't always arrive.

These kinds of stories abound. Benefits getting skimmed off by commanders. Soldiers have to chip in to buy coffins for their slain comrades. Soldiers get stuck on the front line year after year because it takes a bribe to get sent to a safer place. Soldiers are killed in action, and their children end up begging in the street.

"I don't want anything special from the government," says Ahmadzai. "All I want is some respect not only for me, but also for all disabled veterans." 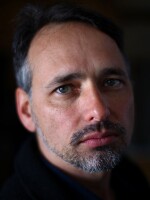 Quil Lawrence
Quil Lawrence is a New York-based correspondent for NPR News, covering veterans' issues nationwide. He won a Robert F. Kennedy Award for his coverage of American veterans and a Gracie Award for coverage of female combat veterans. In 2019 Iraq and Afghanistan Veterans of America honored Quil with its IAVA Salutes Award for Leadership in Journalism.
Sign up for our newsletters!
Keep up with all the latest news, arts and culture, and TV highlights from KPBS.
LATEST IN PODCASTS
LATEST IN EVENTS
LATEST IN TV HIGHLIGHTS
More News