Back now with DAY TO DAY.

Ford announced today that 38,000 workers have accepted offers to leave the company. That's nearly half of Ford's U.S. workforce. Tough days for the automaker, and it's unclear if 38,000 workers leaving will be enough to turn the company around. MARKETPLACE's Amy Scott joins us now from New York.

Amy, what are Ford officials saying about the response to the buyout program?

AMY SCOTT: Well, they'd hoped to get 30,000 volunteers, and this is about 8,000 more than that. So Ford's management has got to be happy about this number. It is preliminary, though, so workers have time to back out if they change their minds. But I talked to Steven Szakaly with the Center for Automotive Research. He says maybe a few thousand could pull out, but it's still a tremendous relief for Ford. Its capacity to make cars is just way out of line with demand for those cars and Ford's market share has slipped, from about 25 percent at the turn of the century, to less than 18 percent now. Szakaly says the money Ford saves on labor costs and facilities could really be spent in other areas.

Mr. Steven Szakaly (Center for Automotive Research): Ford really needs some of this good news. This reduces the pressure, and it will allow Ford to - now that there is some hope in this restructuring - to maybe concentrate more on product development, and to concentrate more on R and D, and maybe make its business more competitive, and halt this decline in market share.

PESCA: So Amy, what do the workers get in return for the buyout?

SCOTT: They'll get anywhere between $35,000 and $145,000 to leave, depending on their age and years of service. You know, many of these workers, looking at Ford's troubles, just figured, you know, they're better off walking away with something. And yesterday, Ford announced plans to borrow as much as $18 billion, partly to pay for the buyout. For the first time, it's put up most of its U.S. auto assets as collateral. That's a pretty risky move, but analysts are saying Ford doesn't have much of a choice at this point.

PESCA: And we've got some other auto news brewing out here, actually, in Los Angeles?

SCOTT: That's right. The L.A. Auto Show opens to the public on Friday, and much of the focus seems to be on cleaner, more efficient cars - more fuel-efficient cars - rather. General Motors is expected to talk up its plans to bring hydrogen-powered fuel-cell vehicles to market within the next few years. Volkswagen and Daimler-Chrysler will be promoting clean-burning diesel cars. BMW is showing off a hydrogen-fueled version of its 7-series sports sedan. So it seems like the big automakers are starting to listen to consumers' worries about fuel costs and the environment.

And later today on MARKETPLACE, hurricane season was unusually quiet this year. We'll explain why that's been great news for some investors. 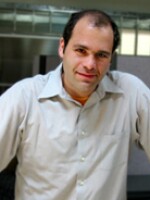 Mike Pesca
Mike Pesca first reached the airwaves as a 10-year-old caller to a New York Jets-themed radio show and has since been able to parlay his interests in sports coverage as a National Desk correspondent for NPR based in New York City.
Sign up for our newsletters!
Keep up with all the latest news, arts and culture, and TV highlights from KPBS.
LATEST IN PODCASTS
LATEST IN EVENTS
LATEST IN TV HIGHLIGHTS
More News