Giuliani Cheered at NRA, Amid Some Skepticism

As mayor of New York, Republican presidential candidate Rudolph Giuliani was critical of both the abundance of guns on the streets and of the National Rifle Association itself. But during an appearance Friday at the NRA's conference in Washington, the man ahead in various GOP polls was interrupted at least a dozen times by applause.

Giuliani put the emphasis on his support of the Second Amendment to the Constitution — which covers the right to bear arms — saying that a person's home is his castle.

He sought to convince the audience of 400 of the NRA's most-active members that he no longer supports a lawsuit launched by several cities, including New York, seeking to hold the gun industry liable for crimes committed with firearms.

He also stressed a point he has made before: that voters should be tolerant of dissenting views.

"The one thing you can be sure about with me is I will tell you what I really believe," he said. "I think there's a certain value in knowing what you agree with and what you disagree with somebody about, and then being able to trust how they're going to move forward."

Jennifer Sheldon, an engineer from Jeffersonville, N.Y., said Giuliani's comments were eye-opening, but many members remained skeptical. People at the conference, and on gun-rights blogs, remain angry over a 1995 appearance on the Charlie Rose show, during which Giuliani called the NRA "extremist" over its opposition to former President Bill Clinton's crime bill, which included an assault weapons ban.

One odd moment during Giuliani's presentation came when he took a cell-phone call from his wife, Judith, drawing laughter, applause and some confusion from those watching.

Other presidential candidates also appeared or sent video-taped greetings to the conference, including one Democrat, New Mexico Gov. Bill Richardson. As for an official endorsement, the NRA's leadership says it is far too early to consider. 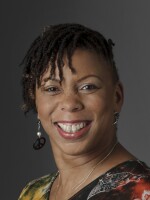 Allison Keyes
Allison Keyes is an award-winning journalist with almost 20 years of experience in print, radio, and television. She has been reporting for NPR's national desk since October 2005. Her reports can be heard on Morning Edition, All Things Considered, and Weekend Edition Sunday.
Sign up for our newsletters!
Keep up with all the latest news, arts and culture, and TV highlights from KPBS.
LATEST IN PODCASTS
LATEST IN EVENTS
LATEST IN TV HIGHLIGHTS
More News