China's COVID vaccines: Do the jabs do the job?

China is in the midst of its first major COVID surge, and it's one of the world's largest.

China rolled back COVID restrictions in early December, and now scientists estimate that the country could be facing more than 10 million new cases each day. Over the next several months, several hundred thousand people could die, perhaps more, several teams predict.

There's also concern that widespread COVID in China could lead to new variants, but variants can emerge anywhere in the world right now as COVID continues to circulate.

The actual death toll – and the total impact of this surge – depends largely on one key factor: How well China's vaccines work.

The two main shots deployed in the country are CoronaVac and Sinopharm, both developed and manufactured in China.

About 90% of the population has received at least two doses of one of these vaccines.

Rumors and misinformation run rampant about COVID vaccines no matter where they're manufactured. But, as NPR has reported, such myths and misconceptions are especially problematic for vaccines made in China. Issues with past vaccines have made segments of the population leery about the made-in-China COVID vaccines. But the misinformation about these vaccines doesn't arise only from inside China or on social media, says global health researcher Xi Chen at Yale University.

"The American media has shared a lot of misinformation about the Chinese vaccines," Chen says. "I read both Chinese and English media stories, and I see some news stories, like from Fox News and others, translated into Chinese." New stories in the U.S. have even questioned the efficacy of these vaccines, despite the fact that both have been approved by the World Health Organization.

Given that more than 700 million people will likely catch COVID in China over the next few months, we thought it would be a good time to dig deep into the science of the Chinese vaccines and analyze what the data show, especially when it comes to two major aspects of the vaccines: efficacy and safety.

"No, that's not true," says epidemiologist Ben Cowling at the University of Hong Kong. "Our research in Hong Kong has shown that's not true. I don't have a concern about the effectiveness of the Chinese vaccine."

The Chinese vaccines are not "mRNA vaccines," like the ones Pfizer and Moderna manufacture. Instead both CoronaVac and Sinopharm use an older, but well-proven, technology: they contain an inactivated – or killed – form of the SARS-CoV-2 virus.

But – and this is key – in a study by Cowling and his team, the Chinese vaccines offered just as much protection against severe disease as the mRNA vaccines for adults under age 60.

Last winter, Hong Kong suffered a massive omicron surge. And this outbreak allowed Cowling and his colleagues to test how well the Chinese vaccine CoronaVac fared compared to the Pfizer vaccine in a faced-to-face match. About half the population in Hong Kong had received CoronaVac and the other half had received the Pfizer vaccine. Altogether, more than 13 million doses had been administered to Hong Kong's 7.4-million people.

And guess what happened?

"We showed very clearly that both vaccines provide a high level of protection against severe COVID," Cowling says.

In the study, Cowling and his team analyzed data from about 20,000 COVID cases, ranging from mild to fatal. They found that two doses of either vaccine offered a high level of protection against severe disease for adults under age 60. Specifically, two doses of the Pfizer vaccine offered 95 to 97% protection, while two doses of CoronaVac offered between 89 and 94% efficacy, the team reported in the Lancet Infectious Disease this past October.

"There's a very good level of protection for three doses of either vaccine," Cowling says. And remember, health experts in the U.S. also recommend people over age 60 receive at least three doses of the Pfizer or Moderna vaccine as well.

Cowling thinks the misinformation about CoronaVac or Sinopharm may stem from early data, looking at the vaccines effectiveness against infection (not severe disease).

Initial data found the Chinese vaccines have a lower level of protection against infection than the mRNA vaccines. "Something around 50 or 60% effective,' Cowling says. By contrast, at first, the Pfizer and Moderna vaccines showed extremely high levels of protection against symptomatic infections against the original strains of the virus.

But with the emergence of the immune-evading variants, such as delta and omicron, eventually all vaccines wound up being basically ineffective against infection, especially more than three to four months after the inoculation.

Meanwhile, there is some uncertainty around the longevity of this protection against severe disease. One study in Brazil, which analyzed COVID cases for more than 3 million people, foundevidence that the protection against severe disease waned more quickly for CoronaVac than for the Pfizer vaccine. But that study didn't separate the data by age, and other studies have shown that protection, across the board, declines more quickly for older people. Nevertheless, the Chinese health officials recommend older adults and those with weakened immune systems receive a fourth shot, or second booster, the Global Times reportedearlier this month.

In the initial clinical trials for CoronaVac and Sinopharm, scientists tested the vaccines only on adults under age 60, says epidemiologist Jennifer Bouey at Georgetown University and the nonprofit RAND corporation. On top of that the first two vaccination campaigns in China didn't focus on elders.

That exclusion from both the trials and vaccination campaigns has led to the relatively low vaccination rate among elders in China. "And it has also led to concerns about whether the vaccines were safe and effective among the elders," Bouey explains.

However, since then, both CoronaVac and Sinopharm have each been tested in more than a dozen international studies including one in Turkey with about 12,000 participants, one in Brazil with more than 3 million participants and one in Chile that surveyed more than 10 million vaccinations. In one study, looking specifically at the safety of CoronaVac, researchers at the University of São Paulo oversaw the immunization of about 12,000 people. They documented "67 serious adverse events ... and all were determined to be unrelated to vaccination," the team reported. Given these results, "the data available to date indicate that Sinovac-CoronaVac is generally well tolerated and consistent with the safety profile of other licensed, alum-adjuvanted inactivated vaccines," WHO wrotein May 2021.

CoronaVac and Sinopharm have been administered to several billion people in over a 100 countries. They made up about half of all shots administered worldwide in 2021. "I've never seen any reports of severe side effects with these vaccines," Bouey says.

Nevertheless, the initial concerns about the safety, especially for elders, has continued. "Physicians in China aren't sure if the vaccines are safe for the elders," Bouey says. "So there's altogether some distrust and confusion about these vaccines – which the government has pushed so heavily. I read quite a lot of misinformation about the vaccine's side effects on Chinese social media."

The Chinese government has done very little to counter the narrative, she adds. "The government should probably do more to convince people that these vaccines are safe for elders and more vulnerable groups. Because these people not only need the most protection, she says, they need the most shots. "The elders and the more vulnerable need more frequent boosters," she says.

Because once this massive COVID surge ends, China won't be out of the woods, Another surge will surely follow. 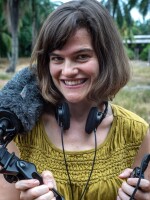 Michaeleen Doucleff
Michaeleen Doucleff, PhD, is a correspondent for NPR's Science Desk. For nearly a decade, she has been reporting for the radio and the web for NPR's global health outlet, Goats and Soda. Doucleff focuses on disease outbreaks, cross-cultural parenting, and women and children's health.
Sign up for our newsletters!
Keep up with all the latest news, arts and culture, and TV highlights from KPBS.
LATEST IN PODCASTS
LATEST IN EVENTS
LATEST IN TV HIGHLIGHTS
More News