A director critically reexamines his 1980s childhood in 'Armageddon Time'

A lot of filmmakers these days seem to be in an intensely personal, self-reflective mood. There's a terrific movie in theaters right now called Aftersun, and it's based on the childhood memories of its first-time director, Charlotte Wells. Several upcoming films, likeSteven Spielberg's The Fabelmans and Bardo, from Alejandro G. Iñárritu, are also drawn from their filmmakers' life experiences.

Armageddon Time, the latest movie written and directed by James Gray, is an especially thoughtful and moving example. While it's a loving re-creation of a time and place Gray knows well — some of it was shot just blocks away from his childhood home in Queens — the director has more than a rosy nostalgia trip in mind. He's made an uncommonly tough-minded movie about race, class, assimilation and white privilege in America. And while it takes place in 1980, a few months before the election of Ronald Reagan, it has nearly as much to say about the present.

The story follows Paul Graff, an 11-year-old version of Gray played by a wide-eyed young actor named Banks Repeta. Paul wants to be an artist when he grows up. He's also a bit of a class clown at his public school, where his best friend is a Black classmate named Johnny, played by Jaylin Webb. They have fun hanging out and goofing off, and they take turns sticking up for each other when they get in trouble, which is often. But as Paul soon notices, it's Johnny who always gets the more severe punishment. He also knows that Johnny is poor and lives with his grandmother.

That places him in stark contrast with Paul and his comfortably middle-class Jewish family. Gray does a wonderful job of immersing us in the everyday bustle of the Graffs' home, where relatives are always coming over for dinner, none more beloved than Paul's grandfather, affectionately played by Anthony Hopkins.

Jeremy Strong is terrific — and very un-Kendall Roy-like — as Paul's father, a plumber with a big heart and a fierce temper. Anne Hathaway does her finest acting in some time as Paul's gentler but more resilient mother. Like any good parents, Paul's mom and dad only want what's best for him. They've worked hard to make a good living and earn a level of social standing in their community. Given their Jewish immigrant roots, they also know the challenges of assimilating into American culture. At extended gatherings, Paul's relatives share grim stories about the anti-Semitic violence their family fled from in Ukraine. But Gray doesn't shy away from exposing their own casual prejudice: We also hear some of those same relatives spout derogatory remarks about Black people around the dinner table.

It's been a while since I've seen a movie that captured family dynamics with this much unsparing honesty. It's also been a while since I've seen a Hollywood movie with such a layered understanding of how white supremacy pits people of different backgrounds against each other. That's a concept that feels painfully resonant now in a moment of heightened anti-Semitism and anti-Black racism. And just to make the present-day parallels obvious, Gray throws in a sharp jab at the Trump family, a major presence at Paul's private school.

At its heart, though, Armageddon Time is about Paul and Johnny's friendship and how that friendship tragically changes. It's here that things get a little tricky: Some might see Johnny as a regrettable stereotype, the Black character who suffers grievously so that his white friend can learn a hard-hitting lesson. But I think that reading may be too easy, partly because the film is all about the limitations of Paul's perspective, and partly because Gray has no interest in dispensing reassurance or uplift. He's made an angry, despairing movie about one boy's disillusionment with the injustice of the world and his own silent complicity with it. What makes Armageddon Time so powerful is that Gray reserves his harshest anger for himself. 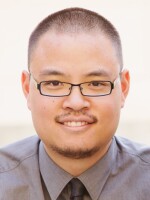 Justin Chang
Justin Chang is a film critic for the Los Angeles Times and NPR's Fresh Air, and a regular contributor to KPCC's FilmWeek. He previously served as chief film critic and editor of film reviews for Variety.
Sign up for our newsletters!
Keep up with all the latest news, arts and culture, and TV highlights from KPBS.
LATEST IN PODCASTS
LATEST IN EVENTS
LATEST IN TV HIGHLIGHTS
Election 2022: Live results
Explore all national, state and local returns now.
See results →
More News