About 70 students Wednesday surrounded a police car with SDSU President Elliot Hirshman inside it and demanded he apologize for his response to fliers posted on campus listing names of students who “have allied themselves with Palestinian terrorists to perpetrate (Boycott, Divest, Sanction) and Jew Hatred on this campus.”

Hirshman, who was sitting on the passenger side of the police car, eventually got out and apologized to those gathered.

“It was a very small and simple apology, but it was what we were looking for,” protester Osama Alkhawaja said.

According to the protesters, the posters began circulating on campus two weeks ago. In an email sent to students Tuesday, Hirshman said:

First, we recognize and fully support the rights of all parties to voice their positions on political issues, whether supportive or critical. We also understand that when parties adopt a specific political position they become responsible for their actions and these actions may produce criticism.

At the same time, we wish to raise an issue for our community to consider. It is possible that the practice of identifying the names of individual students who participate in controversial political discussions, solely for the purpose of identifying them as proponents of a viewpoint, could discourage students from participating in political discussions.

In this context, we write to encourage all members of our community to present their positions on important political issues, regardless of the nature of their position. We also wish to explicitly note that we strongly endorse our university policies protecting freedom of expression. We raise these issues to strengthen our tradition of vibrant discourse about ideas and issues and encourage all members of our community to participate in these discussions.

“All the people that are mentioned in the list are my friends,” Pablo Tinoca, a San Diego State University junior, said a few hours before the protest. He said that Hirshman’s email should have condemned the fliers and a classified ad that was published on The Daily Aztec on April 20:

“These students feel very unsafe on campus right now because they're being targeted and they're being called terrorists and sympathizers of terrorist organizations,” said Fayaz Nawabi, a senior and a member of the Muslim Student Association at SDSU.

Tinoca and Nawabi, who helped organized Wednesday’s protest, said that university officials at UCLA condemned similar fliers that showed up at the Los Angeles campus.

“The Canary Mission put out this list of students throughout the entire U.S. that are part of the Students For Justice In Palestine, and are saying that these people are terrorists and they are secretly trying to take over America, or something of that disgusting, obvious defamation,” Nawabi said.

Wednesday's protest was peaceful, but San Diego police did respond to help SDSU officers control the situation. Hirshman remained in a patrol car for about an hour before getting out to speak briefly to the protesters.

Hanif Mohebi, executive director of San Diego's Center on American Islamic Relations, told the crowd it was "shameful" that Hirshman was not addressing the crowd.

Protest has wrapped up. Protest leader said SDSU president apologized and crowd let him through. https://t.co/iLAWWEWYYk 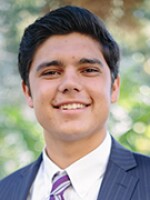 Kristina Bravo
Before joining KPBS in 2016, Kristina lived in Los Angeles where she was a news clerk with Southern California Public Radio’s digital team. In that job, she reported and wrote stories for the web, copy edited news stories and did social media to promote the newsroom’s work. Kristina was previously an assistant editor at Participant Media, where she covered wildlife, the environment, food and social justice. Her work has also appeared in L.A. Weekly, the Village Voice, the Christian Science Monitor, Mashable and other outlets. She studied English literature at California State University, Los Angeles, where she earned her bachelor’s degree.
See stories by Kristina Bravo
Sign up for our newsletters!
Keep up with all the latest news, arts and culture, and TV highlights from KPBS.
LATEST IN PODCASTS
LATEST IN EVENTS
LATEST IN TV HIGHLIGHTS
Election 2022: Live results
Explore all national, state and local returns now.
See results →
More News