UC San Diego’s commencement ceremonies are in full swing, and this Sunday one student will celebrate completing her education after nearly 50 years.

Muir College was established on the UCSD campus in 1967, and Patricia Campbell was part of its first class. She was almost finished with her degree until she got injured in an accident in 1972, which threw her off her stride.

“I got two incompletes so… you know, I just got busy with life and kind of worked on finishing the incompletes in a desultory way," the 64-year-old Campbell said.

"I actually had two papers, all I needed to do, and I had them pretty much done, but then, you know, distractions and this and that and the other thing, and then I just kind of shrugged and went on with my life."

Campbell ended up having a career in publishing, then producing commercials. She lived in Los Angeles for years, then moved home to take care of her aging and ailing mother.

She decided, since she was back in San Diego anyway, to contact her former university about finally finishing her degree.

“I just wanted to do it, and I did, and that’s it! You know, I mean it isn’t like I had monstrous plans, and I had to have a degree to go pursue these things. No, it’s something to cross off a list so it’s not kind of niggling at you anymore," she said, laughing.

It took her four classes and two quarters, since more prerequisites had been added since she had left. But 47 years later, Patricia Campbell has a degree in sociology from UC San Diego.

Campbell is one of two students from that original class. Christy Rodriguez will also be among the 7,000 students graduating over the weekend. Her degree is in political science. 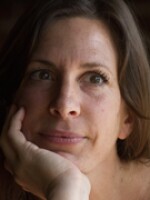 Brooke Binkowski
Brooke Binkowski is professional journalist whose career and interests have taken her to Mexico, Alaska, Europe, North Africa, and South America. She also worked as a freelance border and immigration reporter while finishing her master’s degree in Latin American Studies from the University of California, San Diego, focusing on the culture of the U.S.-Mexico Border and Mexican immigration to Anchorage, Alaska. Brooke covered her first story as a cub reporter in San Diego nearly twenty years ago and didn't look back. She worked for KFQD in Anchorage, CNN in Atlanta, and KNX and Southern California Public Radio in Los Angeles before arriving back in San Diego to finish her degree. She has also reported for NPR, CBS, and the BBC. In addition to journalism and travel, Brooke also likes fencing, playing accordion, taking photos, reading, running, and nearly everything else.
See stories by Brooke Binkowski
Sign up for our newsletters!
Keep up with all the latest news, arts and culture, and TV highlights from KPBS.
LATEST IN PODCASTS
LATEST IN EVENTS
LATEST IN TV HIGHLIGHTS
Election 2022: Live results
Explore all national, state and local returns now.
See results →
More News