The group interprets and adapts classic stories such as Medea, Orpheus, Kafka's Metamorphosis and even the silent film Nosferatu. Performances feature daring costumes, modern music, edgy choreography and no shortage of sex and violence. Most surprising, though, are the actors: Almost all are mentally disabled.

Seeing people with Downs Syndrome or cognitive disabilities in wild makeup, acting in funny and disturbing scenes, raises the question of whether the actors might be exploited. That is, until you talk to some of them.

Hannes Janke, who is 45, has been acting with the company since 1994. He survived a brain tumor as a child, which gave him severe epilepsy and diminished his mental capabilities. With some work, he memorizes lines and performs on stage. He says Ramba Zamba is an important part of his life.

"The theater for me is everything," Janke says. "I would definitely miss something if this theater lost its funding and disappeared. We mentally disabled people find something here... Without this theater, we would be sitting on the street. We're attached to this theater with body and soul. It's our theater, and we are proud of this theater."

Warren Rosenblum, an expert in modern German history, sees references in Ramba Zamba's work to Germany's grim history under National Socialism, when it's estimated that hundreds of thousands of disabled people were considered worthless and killed.

Last month brought a grim reminder of this. A mass grave was found in western Germany. The bodies are thought to include disabled children and adults killed during the Nazi era. It's hard to hide from this history in Germany, but it's also hard to face it.

"What Ramba Zamba does is address that history," Rosenblum says. "I think it would be a jolting theater in any environment. It's the kind of theater that, at points, can really make you squirm. And certainly it's theater that makes you think, but it's especially poignant in the context of Germany because of this history." 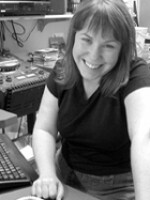 Susan Stone
Susan Stone is a contributing reporter/producer for NPR based in Berlin, Germany. Before relocating to Germany for a Robert Bosch Foundation Fellowship in 2005, she was a producer, editor, reporter and director at NPRs headquarters in Washington for 10 years. Most recently, Stone was a producer and director for the weekend editions of NPR's award-winning news magazine All Things Considered, where she created a signature monthly music feature for the show.
Sign up for our newsletters!
Keep up with all the latest news, arts and culture, and TV highlights from KPBS.
LATEST IN PODCASTS
LATEST IN EVENTS
LATEST IN TV HIGHLIGHTS
More News