The southern African nation of Zimbabwe has become a target of international attention following the beating of opposition party activists. NPR's Ofeibea Quist-Arcton is in Harare, Zimbabwe, giving us a first-hand look at the turmoil. So thank you for joining us. It's very unusual for a reporter to get into Zimbabwe these days.

OFEIBEA QUIST-ARCTON: Well, I said to the government you complain that the international media and that the Western media only gives one side of the story, so I'm coming in officially and I'd like to be given accreditation, please, so that I can get your side of the story as well as the opposition's side. So that's why NPR has been allowed here.

CHIDEYA: Well, let's start out with the situation surrounding two opposition party activists who were injured in a protest. Tell us what has been going on with them as the most recent development.

QUIST-ARCTON: The two in question, two women - one, a 64-year-old grandmother, Sekai Holland, and Grace Kwinje, who's a younger activist of The Movement For Democratic Change here in Zimbabwe - were amongst the opposition leaders who apparently went to look at what had happened to colleagues after a peaceful prayer meeting that the opposition said it was withholding on the 11th of March turned violent when the police decided to crack down on opposition activists.

Now, they had gone to find out what had happened to their colleagues when they were taken into police custody and they say were beaten brutally. If you look at Mrs. Holland - a 64-year-old woman, as I say - she has bruises all over her body.

She's got a broken arm, a broken leg. And despite that, she says she is feeling strong because Zimbabwe and democracy is what she is fighting for. This morning, Madame Holland and Ms. Kwinje were flown out of the country. They tried at over the weekend to leave, but their passports were confiscated and they were taken back to Avenues clinic here in Harare.

But today, they have been able to leave. I was actually at the clinic with them in the morning as they were being medevaced, a medical evacuation to South Africa. And both women were looking a little frail, I have to say, after the ordeal they had been through.

They were - both said they have been beaten for about six hours and then didn't receive proper medical attention for three days. But both of them said that they were looking forward to coming back to Zimbabwe because they want to continue the fight for democracy in their country.

CHIDEYA: Zimbabwe has been analyzed many times by many people in different countries as effectively a one-party state. And The Movement For Democratic Change has not been able to be a fully-fledged member of the political system in Zimbabwe. You mentioned that you were there to get different sides of the story. Have you been able to talk to major party officials from ZANU-PF?

QUIST-ARCTON: I haven't yet. I have put in a bid to speak to President Robert Mugabe because, of course, he's a leader of Zimbabwe. But I have spoken to some people who deal with news and information and publicity because they are the people who give out accreditation.

The government maintains that opposition activists attacked the police and that the police responded. And the police responded apparently very brutally. That's why there's been such an international reaction from Washington, from London, Britain - the former colonial power - and more mutedly from other African countries that this has got to stop.

Zimbabwe has got to find some solution. But the government maintains that the opposition, as President Mugabe put it, shameless stooges and mischief-makers who are plotting with the West, especially the government in London, to overthrow his government.

Everybody, though, is saying there has to be dialogue. I'm coming from a press conference held by the archbishop of Bulawayo, Pius Ncube, who said everybody must get on the streets to say no to violence, no to repression, no to what's going on. But that there's got to be a peaceful dialogue, that there's got to be peaceful change in this country, and that everybody must stand up as one to say no.

CHIDEYA: So Ofeibea, you have really some unprecedented access, and we hope to talk to you again before you leave Zimbabwe. Thank you so much.

QUIST-ARCTON: I'm sure you will. And I hope we will be able to talk to about what ordinary Zimbabweans are saying about the situation. Bye-bye. 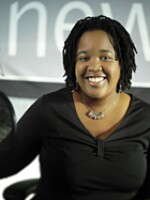 Farai Chideya
Farai Chideya is a multimedia journalist who has worked in print, television, online, and radio. Prior to joining NPR's News & Notes, Chideya hosted Your Call, a daily news and cultural call-in show on San Francisco's KALW 91.7 FM. Chideya has also been a correspondent for ABC News, anchored the prime time program Pure Oxygen on the Oxygen women's channel, and contributed commentaries to CNN, Fox, MSNBC, and BET. She got her start as a researcher and reporter at Newsweek magazine. In 1997 Newsweek named her to its "Century Club" of 100 people to watch.
Sign up for our newsletters!
Keep up with all the latest news, arts and culture, and TV highlights from KPBS.
LATEST IN PODCASTS
LATEST IN EVENTS
LATEST IN TV HIGHLIGHTS
Get ready to vote
What questions do you have about the Statewide General Election coming up on Nov. 8? Submit your questions here, and we'll try to answer them in our reporting.
Launch →
More News