A Woman's Mission: To Teach Birth Control In Nigeria

By The Kitchen Sisters

Writer Chris Abani grew up in a small, rural village in Nigeria. He remembers sitting on the porch with his English-born mother, drinking tea, eating cucumber sandwiches, listening to Glenn Miller and learning to knit.

And he also remembers time spent away from home, touring the countryside with his mother, Daphne Mae Hunt, who was on a mission to help women. With her 8-year-old son, who spoke Igbo, serving as interpreter, Hunt taught Nigerian women a method of birth control that was in keeping with her Catholic faith.

Hunt was born in 1931, about 20 miles outside of London, where her father worked as a groundskeeper on a large estate. When she was 11, she took her school exams and got the highest grade in the entire school. But she was a girl and her mother was very uncomfortable with her going to college, so she went to secretarial school instead.

In the 1950s, Hunt met Michael Abani at Oxford. She was working as a secretary in the geography department. He was a promising young scholarship student from a small farming and fishing village in Nigeria. The two became inseparable.

I didn't even know if women had language for this. So I would have to approximate all of this with natural phenomena that I understood. For a heavy flow, I would ask, 'Is it like a waterfall?' For medium flow, 'Is it flowing like a river?' For a light flow, 'Is it like a brook?'

"I can imagine him being completely entranced by this small white woman who had such a big, big spirit," Chris Abani says.

Daphne and Michael got married in 1957 in Nigeria, and she lived there for the next 30 years. Hunt had been a member of the Church of England, but her husband was very Catholic, and one of the conditions of getting married was that Hunt convert to Catholicism. She did, taking her new religion very seriously.

At the time, there was a big push for birth control within the local government. The average woman in rural Nigeria was having eight or nine children. The Catholic Church wanted to be seen as a leader in the community, but wouldn't support condoms. So the church endorsed the Billings Ovulation Method, a form of birth control that involves a woman monitoring her monthly menstrual cycles to determine when she's fertile and when she's not.

Hunt became certified as a Billings Ovulation teacher. Her job was to teach this birth control method to rural women. But there was one problem: Although she spoke some Igbo, her command of the language was not good enough for such a sensitive and complex subject. So she enlisted her son, Chris, to interpret.

With a backpack full of pictures and charts, Abani and his mother would set off and go from door to door. It was Abani's job to begin the conversation in Igbo.

"Everything starts with a greeting," Abani explains. "I would say, 'Good afternoon, mothers.' You greeted a woman who had children in the plural. It would be followed by an apology from me because I was about to discuss something sacred, taboo.

Hunt would ask her son to ask the women if they were on their "holy period." And she would want to know about the flow.

"I didn't even know if women had language for this," Abani says. "So I would have to approximate all of this with natural phenomena that I understood. For a heavy flow, I would ask, 'Is it like a waterfall?' For medium flow, 'Is it flowing like a river?' For a light flow, 'Is it like a brook?' "

Within traditional Nigerian culture, the menstrual cycle is both respected and feared. A menstruating woman is in her sacred moment and it's not talked about. Women don't even discuss periods with their husbands.

"And here I am, this 8-year-old boy who they're having to ask questions in Igbo for me to ask in English. But my mother didn't think twice about it, because this is what women needed," Abani says. "If the Catholic Church was going to ban condoms, she was determined that they would find this birth control information somehow."

Hunt didn't think that anything she did was strange or important or groundbreaking or risque, Abani says. She just did it.

"It never struck my mother as odd that a young boy would discuss a woman's menstrual cycle. She would always say, 'Every good man needs a little bit of woman in them.' " 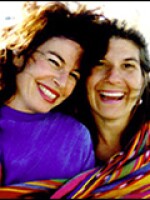