U.S. Secretary of State Hillary Clinton visited South Korea on Wednesday amid rising tensions with the North, calling on Pyongyang to halt its provocations and announcing plans for joint military exercises with the South "to ensure readiness and to deter future attacks."

Clinton is wrapping up her tour of Northeast Asia as hostilities are reigniting on the Korean peninsula. North Korea threatened to cut all ties to the South in retaliation after Seoul accused it of an attack on a naval vessel that killed 46 sailors. And South Korea said it would redesignate North Korea as its archenemy.

During a joint media briefing with South Korea's foreign minister, Clinton said the U.S. and South Korean militaries have announced plans for joint exercises, and that the U.S. "is also reviewing additional options and authorities to hold North Korea and its leaders accountable." Clinton also called on North Korea to end its policy of threats and take steps to fulfill its denuclearization commitments and comply with international law.

"North Korea can still choose another path. Instead of isolation, poverty conflict and condemnation, North Korea could enjoy integration, prosperity, peace and respect," she said.

Her comments come against the backdrop of South Korea announcing measures to punish the North for the alleged attack, including stopping trade with North Korea and stopping the North's cargo ships from using its shipping lines. And, after a six-year suspension, the South also began rebroadcasting radio propaganda across the heavily demilitarized border. North Korea, in turn, began broadcasting its own propaganda.

During a media tour to Panmunjom, a South Korean soldier warned visitors about security at the DMZ.

"We're approaching the joint security area and Checkpoint Charlie," he said. The checkpoint, which is manned 24 hours a day, regulates all traffic in and out of the joint security area, and tensions are very high, the soldier said. "So during the tour today, please do not point at them or make any gestures toward the North Koreans. Do not try to communicate with the North Koreans, please."

After the tour, visitors could stop at Imjingak, a tourist site just below the DMZ, where a vendor trying to sell old CDs and DMZ memorabilia played a South Korean love song.

A 65-year-old guide, Chung Seong-chun, said he's not worried at all, and that tourists aren't concerned about North Korea threatening an all-out war.

"When people get annoyed, they tense up, so they threaten a war," he said. "But they think, too. They wouldn't do things without thinking."

"It frustrates me," he said. "We are divided, and there might be a war. Unlike other countries, U.S. soldiers are stationed here because of North Korea."

And that scares him, he said. 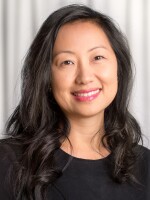 Doualy Xaykaothao
Doualy Xaykaothao is a newscaster and reporter for NPR.
Sign up for our newsletters!
Keep up with all the latest news, arts and culture, and TV highlights from KPBS.
LATEST IN PODCASTS
LATEST IN EVENTS
LATEST IN TV HIGHLIGHTS
Election 2022: Live results
Explore all national, state and local returns now.
See results →
More News