Yemen's Civil War Pushes The Country To The Brink Of Famine

The war in Yemen is now in its third year. The U.S. has been supporting the Saudi-led airstrikes there. Experts say the conflict has driven that country to the brink of famine. And in new reports, they are warning that thousands of people, mostly children, are already dying of starvation. NPR's Ruth Sherlock reports.

RUTH SHERLOCK, BYLINE: A doctor weighs a baby in a hospital room filled with emaciated infant patients. The children in this video posted online are living skeletons. You can count every rib. This is the new reality in Yemen. The charity Save the Children now say that some 85,000 infants under the age of 5 may have died from hunger or disease since the war there began in 2015. United Nations statistics also contain a grim warning. Over 400,000 children will suffer from acute malnutrition by the end of this year.

SHERLOCK: Videos posted by locals on YouTube show the war around Hodeidah, a city whose port is Yemen's lifeline for supplies. The fighting is between the government, backed by Saudi Arabia, and Houthi rebels, helped by Iran. Saudi blockades limit essential food imports. And mines planted by Houthi rebels prevent distribution. Save the Children said that for every child killed by bombs and bullets, dozens are starving to death. And it's entirely preventable. Ruth Sherlock, NPR News, Beirut. Transcript provided by NPR, Copyright NPR. 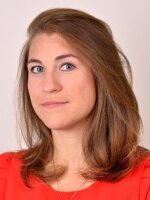 Ruth Sherlock
Ruth Sherlock is an International Correspondent with National Public Radio. She's based in Beirut and reports on Syria and other countries around the Middle East. She was previously the United States Editor for the Daily Telegraph, covering the 2016 US election. Before moving to the US in the spring of 2015, she was the Telegraph's Middle East correspondent.
Sign up for our newsletters!
Keep up with all the latest news, arts and culture, and TV highlights from KPBS.
LATEST IN PODCASTS
LATEST IN EVENTS
LATEST IN TV HIGHLIGHTS
More News