March Madness In Black And White

Well, that was some big news last week — the first major health care bill in half a century passed the Congress; there was a big march in support of immigration reform. Oh, and the NCAA basketball tournaments saw some major upsets.

I'll admit it: I was watching all three developments with almost equal interest. I said almost, and since I was off with the kids on their spring break, I stayed up late and watched the games without guilt.

The Baylor women taking down [Tennessee's] Lady Vols? Off the hook!

Did I say I watched without guilt?

Let me rephrase. Almost without guilt. Because then I looked up the graduation rates for the players in those tournaments and, what do you know, that story is not so sweet. Especially when it comes to the men.

This is the deal, according to the Institute for Diversity and Ethics in Sport, which is part of the University of Central Florida's College of Business Administration: Among the Sweet Sixteen on the men's side, 76 percent of white student-athletes graduated, compared with 49 percent of their black counterparts.

Among the teams in the men's Final Four, the overall graduation figures are as follows: at Duke, it was 92 percent; at Butler, 90 percent; at Michigan State, 58 percent; and at West Virginia, 44 percent.

Now, the women's Final Four has yet to be set, but think about this: All of the women's teams in the Sweet Sixteen graduated at least two-thirds of their players, and six of those teams graduated every single one of their white and black student athletes.

Do you see where I am going with this? I like sports, and I played sports. But can I just tell you? I think it is really time we stopped lying to ourselves about just who is getting the better end of this deal.

Watching at home, or in the arena, we get the thrills and something to talk about over Starbucks the next day, and the coaches get ever-fatter paychecks, and the schools get the television revenue. We all keep telling ourselves these kids are getting an education that many otherwise would not.

But are they really?

At Kentucky, the graduation rate was 18 percent for the African-American male students; at Washington, 20 percent; as I just mentioned, at West Virginia, 30 percent.

(Just so you know, these figures came from the NCAA and were crunched by the folks at the institute.)

But before you ask, the NCAA allows institutions to subtract the academic information about athletes who leave prior to graduation, as long as they would have been academically eligible to compete if they had stayed. So this is not about students leaving to go pro. It's about kids not getting the education we all pretend they are.

Now, I realize that many people wonder why there isn't the comparable hand-wringing over hockey players and baseball players, many of whom never darken the door of a college classroom at all. And you know what, maybe there should be.

But while the demographics may be part of it, I think it's also because the arrangements in those sports aren't hiding behind the fig leaf of educational opportunity. The farm team system may be a lousy deal, but everybody knows what the deal is, whereas these academic institutions, while basking in their ball-playing glory, are pretending to be one thing while functioning, for some kids at least, as something else entirely.

March Madness? It sure is. 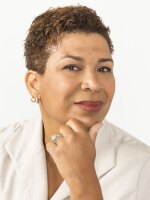 Michel Martin
Michel Martin is the weekend host of All Things Considered and host of the Consider This Saturday podcast, where she draws on her deep reporting and interviewing experience to dig in to the week's news. Outside the studio, she has also hosted "Michel Martin: Going There," an ambitious live event series in collaboration with Member Stations.
Sign up for our newsletters!
Keep up with all the latest news, arts and culture, and TV highlights from KPBS.
LATEST IN PODCASTS
LATEST IN EVENTS
LATEST IN TV HIGHLIGHTS
Get ready to vote
What questions do you have about the Statewide General Election coming up on Nov. 8? Submit your questions here, and we'll try to answer them in our reporting.
Launch →
More News