In 1913, A New York Armory Filled With Art Stunned The Nation

One hundred years ago in New York City, nearly 90,000 people came to see the future of art. The 1913 Armory Show gave America its first look at what avant-garde artists in Europe were doing. Today these artists are in major museums around the world, but in 1913, they were mostly unknown in America.

Boasting 1,400 works — from artists such as George Braque, Mary Cassatt, Paul Cezanne, Edgar Degas, and many, many more — it was the biggest art show New York had ever seen. Today, the New York Historical Society is celebrating the Armory centennial with artworks from the original exhibition.

Normally used to store arms and train troops, the 69th Regiment Armory on East 25th Street was an odd venue, but it was big enough to hold it all. "There were lots of comparisons in 1913 of the Armory Show being a bomb from the blue, so the Armory is not inappropriate," says curator Kimberly Orcutt.

The avant-garde show raised hackles. The most controversial work was Marcel Duchamp's Nude Descending a Staircase. Everyone had an opinion about it, including former President Theodore Roosevelt, who compared it to a Navajo rug he had in his bathroom.

Americans were not used to looking at abstract art. And the Duchamp — painted in ochres and browns a year before the Armory Show, was Cubist — splintering a profile figure so it seems to be in motion. The painting provoked critiques of all sorts, including cartoons and poems.

"It was called a bundle of slats, an explosion in a shingle factory," says curator Marilyn Kushner.

Viewers were puzzled; with all those fragments, where was the nude? But they lined up to see it, and the other avant-garde works. Some 87,000 people came to the Armory show. Rich collectors and dealers had seen such art in Europe, but this was the first time the masses got to see — and react to — the new ideas.

If the Duchamp made visitors puzzled, Orcutt says Matisse's 1907 Blue Nude made people mad. The reclining female nude was a traditional subject, says Orcutt, but it was presented in a "distorted" way: "With blue shadows, with colors that didn't have to do with the representation of nature. And some people considered this sort of a backwards step in cultural progress ... to challenge the very foundations of western civilization. ... She was seen as being very primitive, a threat to the progress they felt that they were making here in the United States."

Some American artists were threatened by what they saw at the Armory.

American artists had organized the Armory show — they had chosen the European pictures, and negotiated with dealers and lenders. Almost half the exhibit was made up of American art. So when all the press attention went to Duchamp, Matisse and other controversial foreigners, the Americans were unhappy.

Robert Henri, a leader of the Ashcan school of American artists, had a nude painting in the show called Figure in Motion — and it was a response to the Matisse and Duchamp. The larger-than-life-size woman seems to be stepping toward us. Her image is realistic — not splintered — but still daring, in its way. "She faces the viewer very brashly, with all of her nakedness showing," Kushner says.

American realist John Sloan helped organize the Armory show, and had several works in it. His 1912 McSorley's Bar is a slice-of-New-York-life scene of relaxation and libation.

"The interesting thing also about this is that you only see males in this bar," Kushner says. "But this is the time period in New York when women started venturing out on their own and going into these restaurants — perhaps not bars — but dance halls and restaurants by themselves."

In 1913, women took to the streets, too — with political and social causes.

"Women are marching in the streets not only for the right to vote, but also for the right of open marriages, contraception, the right to have a child without being married to the father," Kushner says. "This was 1913, right! I mean we all thought this happened later, didn't we?"

As this New York Historical Society salute makes clear, the city was bustling 100 ago. On the streets were horse-drawn carriages and automobiles. The Woolworth Building had just been completed, making it the tallest building in town. Electric trains pulled out of Grand Central Station for the first time and new residents arrived in hordes.

"Thousands of immigrants are flooding into the city, so you have a cacophony of many, many different languages," Kushner says. "This was when Europe sort of sat up and said, 'Oh, New York, it's not that backwater. New York is the place of the new and the fresh and the modern.' "

In that exploding city on the Hudson, in addition to the nudes and the cubes, the radical visions and subjects and colors, more than anything else the Armory Show of 1913 was a show about freedom: new ways of thinking and seeing, and expressing yourself. Given the time and the place, Kushner says it was the perfect exhibition:

It's still happening. And if you're in the city before late February 2014 you can see the new and the old at the New York Historical Society's celebration of The Armory Show at 100: Modern Art and Revolution. 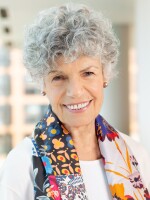 Susan Stamberg
Nationally renowned broadcast journalist Susan Stamberg is a special correspondent for NPR.
Sign up for our newsletters!
Keep up with all the latest news, arts and culture, and TV highlights from KPBS.
LATEST IN PODCASTS
LATEST IN EVENTS
LATEST IN TV HIGHLIGHTS
More News