What Should We Make Of The 'Tweetstorm' Or 'Thread,' Or Whatever You Call It?

When you hear Alana Hope Levinson talk about the death threats she got late last year, in response to a Gizmodo story she wrote railing against "manthreading," she speaks so lackadaisically, you could almost forget how serious it all was.

"I had to alert security at work," she half-jokes, as if that really didn't happen. (It happened.) "Yeah, I mean people were just tweeting at me that they wanted to kill me, and stuff like that."

"Threading" is the practice of repeatedly replying to your own tweets on Twitter, without mentioning yourself, in order to create a (usually rapid) series of tweets "threaded" together that can weave a longer narrative than 140 characters ever could. In her piece, Levinson defined manthreading as when men, usually obnoxious men, do it. "They are typically 'intellectual' dribblings from men who love Explaining Things To Me (essentially a subtype of Online Mansplaining)," she wrote.

Levinson says the "manthreading" piece, which she meant as a joke, turned out to be the most controversial story of her career, "which is funny," she says, "because I've written about drug addiction."

Levinson is just the latest to wander into the jungle that is the Internet's collective reservoir of emotion concerning the tweet thread, or the tweetstorm, or whatever you want to call it. Since as early as 2014, outlets like BuzzFeed have been saying they must be stopped. Just this week, Deadspin called tweetstorms about Trump conspiracies the "the Infowars of the left."

Depending on your state of mind, they're the terrible feed-clogging stuff of blowhards, a sign of male privilege, or a new art form. I, myself, go back and forth over whether my propensity to thread is going to lose me followers, or even worse, my job.

In the midst of unprecedented political discontent, with every new headline seeming to merit a thread from an armchair expert, it is time for us to assess the pros and cons of the tweetstorm, the thread, the whatever and figure out just what it all means.

We should step back here to briefly discuss the history of the words "thread" and "storm" in relation to tweeting. Emily Brewster, an editor at Merriam-Webster, points out that "tweetstorm" isn't officially in their dictionary yet, but it's being considered. She and others credit tech entrepreneur Marc Andreesen and Chris Dixon with coining and popularizing the term in 2014, though she says the word was used before then, as early as 2008, to describe any flurry of Twitter activity, threaded or not. "That threaded quality is not essential to the word tweetstorm," she says. "When the president does tweetstorms, they are often not replies." Also, use of the word "storm" usually indicates a certain haste and strong emotion, perhaps more than in just a "thread."

We should also note that there are so. Many. Threads. Perhaps the most prominent are the ones about politics. The hundred-tweet-plus details of Russian plots to take over American government, complete with hyperlinks. The ones Levinson wrote about. But then there are the novellas. Remember Zola, the stripper-turned-wife-and-mother who in 2015, tweetstormed a tale of stripping, prostitution, breakdowns and love triangles so compelling James Franco bought the movie rights? There's the wonderful thread on infidelity and sexuality, called "Tina and the Gucci Flip Flop," that led to its own Kickstarter campaign (also to make a movie). It's its own entire world that kind of seems like it just became a thing, overnight, out of nowhere.

NPR spoke with two manthreaders called out in Levinson's piece railing against "manthreading." "I had zero plan," Eric Garland said of his "game theory" tweet thread, on the 2016 election and Russia. "I just started, and that's a little bit of why the story careens from side to side."

At the same time, he wrote every tweet knowing it was unchangeable — each ripe for a screengrab. "You only get one shot at it, and it's permanent," Garland said. And he also knew that he would really only talk that way on that medium. "You can say, 'Would you have had that cocktail party conversation differently if was in Harper's?' Well yes, I would have!"

(For his part, Garland says he was surprised by the tone of the manthreading piece regarding his tweets, given that he also tweeted a long thread just the day before, all about the sexism he felt Hillary Clinton experienced over the course of the 2016 campaign.)

Are threads changing the way we talk?

This is the strange thing about threads, and the good thing, depending on who you ask. They are their own art form. Threads and storms straddle a certain fence, existing somewhere in that space between spoken and written word, often fully punctuated, but just as often full of traits meant to mimic the way we sometimes speak (or yell), like all caps. Jeet Heer, another "manthreader" called out in Levinson's story, says threading (and really all of Twitter), allows print language to move much closer to what he calls "orality." For Gretchen McCulloch, an Internet linguist and podcast host, threads are "a new-ish kind of discourse style," not as stylized as a speech or an essay, and not as fragmentary as a conversation. "They bridge the gap."

McCulloch also argues that threading makes you work harder. "It [each tweet] needs to be interpret-able without context or without very, very minimal context," she says. "It's like you're trying to make every tweet as catchy as 'four score and seven years ago.' You don't have the option to make something just a serviceable sentence that then leads into something else."

And Mignon Fogarty, the author and podcast host most well known as "Grammar Girl," also thinks tweetstorms and threads, despite usually being off the cuff, actually lead to better, or at least more meticulous, writing on Twitter. "The writing that I see in tweet threads seems to be more polished than the writing you see in just a stand-alone tweet," she says. "People are thinking of it more as maybe not a complete essay or blog post, but something that is more in that vein."

Where did threads come from?

Besides assessing the linguistic benefits (or failings) of threading and tweetstorming, there's also a philosophical consideration to be made about the form. As an artifact of online culture, you could see tweetstorms and threads as just another manifestation of one of the most beautiful things about the Internet: ingenuity. "Constraints actually foster creativity," Levinson says. "When you have only 140 characters, it actually makes you more creative than if you were given a blank slate." Heer agrees; he thinks the Internet constantly lends itself to innovation, just like pretty much everything else. "You're in Trinidad, you find these steel containers, and you turn them into drums. You give a child a stick, and then they'll use it to draw on the sand."

(Of course, Heer is the guy who wrote the following article: "I Didn't Create The Twitter essay genre. I just made it popular.")

Heer goes even further. "About 15 years ago, in the time of the early Iraq war, blogging was the fast-emerging medium," he says. "And a lot of that's sort of been absorbed by mainstream media. A lot of those writers were hired. There's a lot of venues like Vox.com that institutionalized blogging."

Heer says tweet threading filled the gap. "The energy of blogging, which came from the fact that it was not institutionalized, had to move somewhere else," he says. "Tweeting, especially because it's so interactive, because people respond to you in kind, has a lot of the energy that the old blogs used to."

Basically, Heer's saying threading is the new blogging. It's a seductive premise. But there is a much simpler, and perhaps more dour, view of the rise of the thread: that it's a symptom, a sign of a problem, not a creative force.

Though Twitter refused to respond to NPR's request for an interview, Jordan Kretchmer, GM of Adobe LiveFyre & Adobe Social, Adobe, did. Livefyre acquired Storify in 2013. One of Storify's main priorities is helping people organize their tweets. Kretchmer argues that the rise of the thread is a sign of Twitter not giving users what they want and need, namely the ability to share ideas that are longer than 140 characters.

"It is just a flaw in the system," Kretchmer says. "It is a workaround because the platform did not adapt. It's users finding a solution to the problem the platform should probably solve. And the end result is it's not the most efficient way to communicate for even the people who are doing it."

Kretchmer argues that the biggest result of threading is not energy, but miscommunication and confusion, and individual tweets read out of succession, with no context.

The verdict? No verdict.

So who's right? Should we all just stop threading right now? Or is the new frontier of the tweetstorm the future. Ultimately, it probably doesn't actually matter. They're here, and they're likely to be here for a while. And they may not really be changing anything; maybe they're just the latest vessel through which we manifest all the hangups we had long before the thread, like long-standing biases and hang-ups concerning privilege and class and race. "A lot of feedback I got was people upset that I had sort of framed this as a male thing," Levinson, author of the manthread post, told NPR, "when in fact, in their experience, based on who they follow, women and especially women of color started the threading phenomenon." This was not a problem created by tweetstorms or Levinson's piece. And it will likely outlast both.

If there is not greater meaning to come of the thread or the tweetstorm, other than it's just the latest thing people on the Internet can get upset about (or not), McCulloch, the Internet linguist, says the rise of the thread proves a universal and lingering truth, online or off: "I think what it says is everybody's got an opinion."

And with that, we end with some tweet thread best practices, from Mignon Fogarty, the podcast host:

2) Edit yourself. "Like all other writing, it should be as long as it needs to be," she says, "but usually that's shorter than the writer thinks." 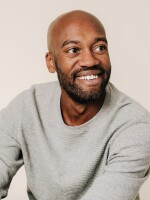 Sam Sanders
Sam Sanders is a correspondent and host of It's Been a Minute with Sam Sanders at NPR. In the show, Sanders engages with journalists, actors, musicians, and listeners to gain the kind of understanding about news and popular culture that can only be reached through conversation. The podcast releases two episodes each week: a "deep dive" interview on Tuesdays, as well as a Friday wrap of the week's news.
Sign up for our newsletters!
Keep up with all the latest news, arts and culture, and TV highlights from KPBS.
LATEST IN PODCASTS
LATEST IN EVENTS
LATEST IN TV HIGHLIGHTS
More News