Smiling fans pour off the trolley, funnel into the convention center, and swarm the halls of Comic-Con. & Shoulder to shoulder, & every stranger with a badge is an old friend. 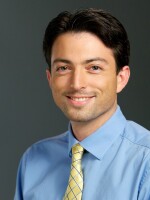 Nathan Gibbs
Nathan Gibbs develops, enhances and maintains tools and services to bring KPBS content to life on digital platforms. He works across departments and with station partners to create and maintain competitive interactive platforms and tools. His recent project credits include the KPBS iPhone app, mobile radio streaming, a Web and mobile redesign for the Fronteras Desk, and making KPBS television programs available through the PBS iPad app. In addition to his work at KPBS, Nathan has served as an adjunct instructor of multimedia journalism for Point Loma Nazarene University, taught video production at Platt College, and led photography and audio production training for the Fronteras Desk boot camp. He's a contributor to PBS MediaShift and was the blog's first social media editor. Nathan began his career in public media as a radio announcer in 1998 for KACU in Abilene, Texas. In 2000, he completed a B.S. in electronic media from Abilene Christian University, where he earned college awards for photojournalism, video production and music composition. Nathan joined KPBS in 2004 as the technical director for KPBS Radio where produced a number of public affairs segments focused on Latino issues. He also produced local episodes of StoryCorps, an independent radio documentary, original multimedia features, as well as photography and video elements for live musical performances. As a Web Producer during the 2007 San Diego wildfires, Nathan played a key role in the successful use of social media that led to the station's Mark Twain Award for "Best Use of Web for Breaking News." He also received First Place and Best of Show awards for "Integration of Media" from the San Diego Press Club for his work on Web elements for the television documentary series Envision San Diego. Nathan brings a mix of journalistic and artistic experience to KPBS. In 2004, he completed an M.F.A. in electronic arts from Rensselaer Polytechnic Institute in Troy, New York. As an independent artist, his work has been exhibited in Tijuana, San Diego, Pittsburgh, New York City, Belgium, China, New Zealand and Spain.
See stories by Nathan Gibbs
Sign up for our newsletters!
Keep up with all the latest news, arts and culture, and TV highlights from KPBS.
LATEST IN PODCASTS
LATEST IN EVENTS
LATEST IN TV HIGHLIGHTS
More News