One local religious leader is supporting the "Occupy San Diego" movement with a simple message: Let them eat pie.

"OCCU-PIE San Diego" takes place Monday, Nov. 21 from 5:30 p.m. to 7 p.m. The idea was conceived by Unitarian Universalist Reverend David Miller, who is urging people to not only attend, but to also bring apple, pumpkin, peach or even chicken or turkey pot pies with them to share.

Miller says those who attend this evening's downtown event in Civic Center Plaza should leave with a full stomach.

"It's Thanksgiving week," he said, "and I just felt it was a good week to offer thanks and gratitude for what we already have. And to feed each other and nourish each other."

Despite the event's punny name, Miller is serious about the protests.

He sees the country's growing wealth disparity as a crucial moral issue, and said the "Occupy" protests share a pedigree with such societal conflicts as the civil rights movement.

"To [Unitarian Universalists], and to others I know - people of what I would maybe call progressive faith - this is a moral movement about human relations and human justice and economic justice and human dignity," said Miller.

He expects clergy from other religions to attend, and hopes they will bring some of their congregation to this all-inclusive feast. He even said he'd love for the police to join in. 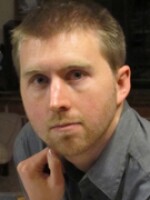 Nico Smedley
As an editorial intern, Nico produced local news spots for radio and shoots and produces brief segments for "KPBS Evening Edition." Nico graduated from UCLA in 2006 with a bachelor's degree in history. Afterward he worked for two years at the Los Angeles Times, first as an Editorial Assistant and then as Editorial Pages Aide. More recently, he completed San Diego Continuing Education's 11 month Interactive Media Certificate Program (2011). Nico is passionate about his home state of California and loves exploring its many diverse communities.
See stories by Nico Smedley
Sign up for our newsletters!
Keep up with all the latest news, arts and culture, and TV highlights from KPBS.
LATEST IN PODCASTS
LATEST IN EVENTS
LATEST IN TV HIGHLIGHTS
More News