Syria's brutal repression of an anti-government movement that began in March continues — even outside its borders. In neighboring Lebanon, the disappearance of an elderly government critic underscores the long reach of the Syrian regime.

Until recently, 89-year-old Shibli al-Aisamy spent most of his time in the United States. As a founder of the pan-Arab Ba'ath Party in the 1960s, Aisamy had once served as a vice president of Syria. He later broke with then-Syrian President Hafez Assad, the father of the current president, Bashar Assad.

Aisamy's family says he was a known opposition figure, who spoke and wrote about the failings of the Syrian regime. But that was 20 years ago. Lately, they say, Aisamy was leading a quiet life.

His daughter, Rajaa Sharafeddine, lives in Lebanon, on a mountain in a town overlooking Beirut. In May, Aisamy visited her there.

His routine was to take a walk twice a day. On May 24, his daughter says, something happened.

"That day, he walked at 4:30 [in the] afternoon. My mother gave him around one hour maximum. So when one hour passed, my mother phoned me, and she was worried. She told me, 'Your father didn't come back,' " Sharafeddine recalls

The two went looking for Aisamy in a car. At first they thought he'd tripped and fallen, as he had two days before. When a night passed with no word from the hospitals, the mother had a bad feeling.

What we can see is the impact those disappearances have on Syrian activists. ... They live in fear in Lebanon. I've been interviewing dozens and dozens of Syrian activists who have sought temporary shelter in Lebanon while waiting for another country, and they are terrified.

"So my mother said, 'No, something wrong, something happened — to kidnap him,' " Sharafeddine says.

Weeks later, a witness came forward and said he saw two men get out of the SUVs and grab Aisamy under the armpits.

"One of them hold him from left side, the other on the right side, and they put him in the car, and they left, fast, quickly," Sharafeddine says.

The family started hearing that Aisamy had been kidnapped and taken to Syria. Now, the family is certain that he is being held in a Syrian prison. His son-in-law, Raja Sharafeddine, says they have pleaded with Lebanese politicians for help.

"He's 90 years of age. He might die between one day and the other. Please release him. Let him die on his bed, beside his granddaughters, grandsons. You know, they never listened," Raja Sharafeddine says.

Aisamy's is not the only case. Three Syrian brothers were recently kidnapped in Lebanon and taken back to Syria. They were seized after distributing fliers about protests against the regime.

Syrian protesters in Europe are regularly beaten by pro-regime thugs. One man in the U.S. was recently arrested for spying on Syrian dissidents.

Nadim Houry heads the Human Rights Watch office in Beirut. He says most countries investigate such behavior. Lebanon — which was basically occupied by Syria for almost 30 years and continues to have a complicated relationship with its neighbor — does not.

So the facts of cases like Aisamy's remain unknown.

"But what we can see is the impact those disappearances have on Syrian activists. And that's very clear. They live in fear in Lebanon. I've been interviewing dozens and dozens of Syrian activists who have sought temporary shelter in Lebanon while waiting for another country, and they are terrified," Houry says.

Aisamy's daughter says she balances fear with faith — faith that the regime in Syria will change and her father will be set free.

"Change is a divine order or a cosmic rule. Everything changes," she says. "You can't stop time. You can't control a country forever." 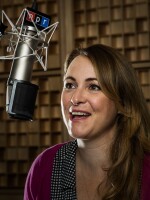 Kelly McEvers
Kelly McEvers is a two-time Peabody Award-winning journalist and former host of NPR's flagship newsmagazine, All Things Considered. She spent much of her career as an international correspondent, reporting from Asia, the former Soviet Union, and the Middle East. She is the creator and host of the acclaimed Embedded podcast, a documentary show that goes to hard places to make sense of the news. She began her career as a newspaper reporter in Chicago.
Sign up for our newsletters!
Keep up with all the latest news, arts and culture, and TV highlights from KPBS.
LATEST IN PODCASTS
LATEST IN EVENTS
LATEST IN TV HIGHLIGHTS
More News