Now to India where the death toll from the coronavirus has been low compared to the U.S. or Europe. But India's economy has not escaped the pain. The Prime Minister announced a new coronavirus relief package last night. Here's NPR's Lauren Frayer.

LAUREN FRAYER, BYLINE: Prime Minister Narendra Modi says this additional relief money will bring the government's total coronavirus stimulus spending up to $266 billion. In a televised address to the nation, he said it's aimed at hundreds of millions of Indians who are struggling financially under the world's biggest coronavirus lockdown.

FRAYER: "For the laborer, for the farmer who toils in every season," Modi said. "This package is for honest, middle-class taxpayers and Indian industries." It's been seven weeks since India shut down almost completely. COVID-19 has killed about 2,400 people in a population of nearly 1.4 billion. But the worry is that the lockdown, which Modi hinted will likely continue, may reverse decades of economic growth that's pulled multitudes out of poverty.

Now tens of millions of migrant workers are not only jobless, many have been left homeless. Some have starved to death on the side of the road. Economist Jayati Ghosh says Modi failed to give details of how this money would reach people. For example...

JAYATI GHOSH: A program of cash transfers for migrant workers or something like an employment guarantee program, give free food to everybody who needs it. All of these are measures he could simply have announced. It would have instilled confidence in the hundreds of millions of people who are extremely desperate.

FRAYER: Modi said this new relief money amounts to nearly 10% of India's GDP. That would make it proportionally one of the largest fiscal stimulus packages in the world. But Ghosh says that's misleading.

GHOSH: Unfortunately, the actual package is mostly smoke and mirrors. He admitted that the package contains money that has already been allocated and spent, as well as measures of the central bank which are not fiscal measures at all.

FRAYER: Ghosh says the package may really amount to as little as 2 1/2 percent of India's GDP, not 10. Meanwhile, in his speech last night, Modi also announced a new slogan to help India through the coronavirus crisis. 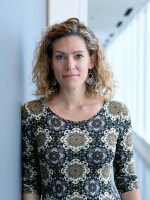 Lauren Frayer
Lauren Frayer covers South Asia for NPR News. In 2018, she opened a new NPR bureau in India's biggest city, its financial center, and the heart of Bollywood—Mumbai.
Sign up for our newsletters!
Keep up with all the latest news, arts and culture, and TV highlights from KPBS.
LATEST IN PODCASTS
LATEST IN EVENTS
LATEST IN TV HIGHLIGHTS
More News