Screening: 'I Am Not A Hipster'

Film About San Diego Music Scene Screens At The Ken

I Am Not A Hipster Screening

"I Am Not A Hipster," set against the San Diego indie music scene, premiered last January at Sundance. Tonight at 7:00pm it screens at Landmark's Ken Cinema with filmmakers Destin Cretton and Ron Najor on hand for a Q&A and after party at the Ken Club.

The film was made by SDSU film school graduates Destin Cretton and Ron Najor.

And that meant distributing the film themselves and booking it into one theater at a time.

"There's a lot of mom and pop theaters all over the country that love playing independent films," says producer Ron Najor, "and also with the digital age coming about there's so many platforms now for independent films like iTunes, Amazon, there's just so many things happening that's both old and new and it's just like juggling the two and figuring out what is the best overall thing for us and I think for Hipster we got it into 10 theaters nationally, we're going to be on 7 digital platforms, we're going to be on cable VOD in like 50 million homes all on like January 15."

For more information, visit "I Am Not A Hipster." 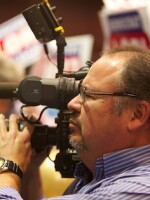 Guillermo Sevilla
Guillermo (Memo) Sevilla joined KPBS in 2008 as a videographer. He has worked on several KPBS productions including Full Focus, San Diego Week, Wonderland, Envision San Diego, San Diego Historic Places, and KPBS Evening Edition. Sevilla has also worked on a variety of KPBS and PBS fundraising productions both in-studio and on location in Los Angeles and Acapulco. Memo started his career in television production in 1986 at Channel 10 while attending Southwestern College. During his 20 years at Channel 10, he worked as a grip, a tape operator, and videographer. Memo has earned two Emmys and several honors from the Society of Professional Journalists, San Diego Press Club, and the California Chicano News Media Association (CCNMA).
See stories by Guillermo Sevilla

Beth Accomando
I cover arts and culture, from Comic-Con to opera, from pop entertainment to fine art, from zombies to Shakespeare. I am interested in going behind the scenes to explore the creative process; seeing how pop culture reflects social issues; and providing a context for art and entertainment.
See stories by Beth Accomando
Sign up for our newsletters!
Keep up with all the latest news, arts and culture, and TV highlights from KPBS.
LATEST IN PODCASTS
LATEST IN EVENTS
LATEST IN TV HIGHLIGHTS
More News