Cold War Love Story: A Boy and His Guitar

It was the early 1980s. Madonna was big. So was Mikhail Gorbachev. And in East Germany, behind the Berlin Wall, Ingo Schluter wanted to be a rock star.

Ingo sang and played guitar in a folk-rock band called Cangaru. And for Ingo and his friends, playing rock 'n' roll was a fantasy come true.

"We liked the rock stars," he recalls. "Keith Richards of the Stones and boys like this. And so I wanted to catch that feeling. To play on stage, and play loud, and have big fun, drink beer, meet women. The old story. Like anywhere in the world."

These days, Ingo still looks a little like a rock star. Angular, skinny, dark curly hair. But he doesn't play as much as he used to.

He's busy. He's got a wife, two boys and a job as a lobbyist for Germany's big labor unions.

But if you go to Ingo's house in Vietlubbe, a tiny village in northern Germany, you'll find an unusual legacy of the Cold War. It's a bedroom packed with copies of famous guitars.

"We have all the Telecaster and Stratocaster models," he says as he shows me around. "And we have a copy of the Ampeg guitar that Keith Richards played in the 1970s. And the rarest of all is a copy of a Gibson Moderne. It's the yellow one here... and it's very, very rare."

Welcome to Ingo's Vintage Ibanez Museum. All of the instruments here have just one thing in common: They were made in the 1960s and 1970s by a Japanese company called Hoshino Gakki and sold under the brand name Ibanez.

In the United States, Ibanez was best known for making pretty cheap copies of the instruments played by big rock stars. An Ibanez was the guitar you bought when you couldn't afford the real thing.

But in East Germany in the 1980s, an Ibanez was the Rolls Royce of guitars. Ingo says that was partly because - in those days - getting any kind of guitar was a big deal.

When he was a teenager, Ingo managed to buy one of those two guitars. It wasn't an Ibanez. In fact, it was a pretty lousy instrument. But that first guitar was good enough to launch his career.

"You can play some songs with two chords," he says, adding that was enough to "impress the girls on the camping site."

And did it work? "Sometimes it worked. I got my wife in this way. She joined my band and became a singer in my band."

The band got going when they were in college. And that is where Ingo fell in love again — this time, with his first Ibanez guitar. It was a beauty with steel strings and pearl inlay - and it was for sale by a Hungarian student. Ingo went to the student's room to take a look.

"And on his bed there lies that guitar," he recalls. "And it looked so great for me. I'll never forget that moment I first saw it. I love it."

The price: 2,000 marks - more than most East German workers made in a month back then. But love conquered all, and the money changed hands.

Then in 1989, Ingo Schluter's country collapsed. The Cold War ended, the Berlin Wall crumbled. And East German rockers? They could buy any guitar they wanted.

"All my colleagues sold their Ibanez copies and bought the American originals," Ingo says.

Ingo bought some new guitars, too. But he held on to his Ibanez. And he got a little nostalgic every time he saw another one listed in the want ads.

So, he started buying them - and created his museum.

"And now I have about 60 Ibanez guitars around me," he says.

It's a little bit stupid, he says, because he's not sure what he'll ever do with all those instruments, or with some of the other rare items in his museum — like his little pink "pop star" license, the one East Germans had to have if they wanted to rock in public.

The "government allowed somebody to be a pop star or not," he says. "And you got a paper, and on the back, you can see there how much we can take for one gig."

Ingo doesn't need a license to play these days. But he says that the reality of freedom hasn't quite matched the image created by rock 'n' roll.

"It was so fascinating for us to see the Western rock stars on TV," he says. "It was our thought of freedom. Now we know that it is not the only way of freedom, that the capitalist system is not as free as it seems on Western TV and rock 'n' roll shows."

Still, when Ingo gets some time, he likes to pull down one of his guitars and rock out in his kitchen with the family. One favorite? Neil Young's Rockin' in the Free World. 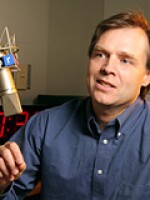 David Malakoff
Nicknamed "Scoop" in high school, David Malakoff joined NPR in December of 2004 as the technology and science correspondent for NPR’s science desk. His stories about how science and technology impact people’s daily lives can be heard on all NPR news programs.
Sign up for our newsletters!
Keep up with all the latest news, arts and culture, and TV highlights from KPBS.
LATEST IN PODCASTS
LATEST IN EVENTS
LATEST IN TV HIGHLIGHTS
More News