Business as 'Normal' in Baghdad's Markets

I went to Baghdad to see how our reporters live, to understand what it means to cover this most important, demanding and dangerous of stories.

I ended up walking a little further than expected in Annie Garrels' shoes, into a five-hour embed hastily proposed and produced by the U.S. Army.

It was an inspection of three Baghdad markets — battlegrounds that insurgents attack and that U.S. forces try to secure.

You can buy just about anything you might need in Baghdad's markets: clothing, spices, curdled yogurt, knock-off watches, power tools, and cell phones with ridiculous ring tones.

Until recently, the Doura market was an insurgent stronghold in this Sunni neighborhood. Now the market is coming back — protected by blast walls in every direction and troops under the command of U.S. Army Maj. General Joseph Fil.

"We do not presume for a moment that this is going to stop suicide bombers," Fil says. "But what it'll do is it'll make them really work hard to get in here."

As we dismount, I watch closely for the reception from Iraqis in the market. We're greeted by a range of looks, some friendly, some hard. But even some of the hardest looks melt when Gen. Fil wades into the crowd like a small town politician trolling for votes.

"Well, I'm very happy that your business is going well," he tells a shopkeeper. "Congratulations," Fil says, adding in Arabic: "I wish you great success."

In early February, a truck bombing at Baghdad's Rasafa market killed at least 135 people. A month later, I saw rubble from that blast still smoldering. But even against this backdrop of destruction, the market has blossomed again, every stall occupied, every spot taken.

If you ignore the cordon of soldiers and hovering Apache helicopters, the market seems almost normal: music blares from the CD stalls, push carts full of carpets roll up the street, and hawkers pitch their wares. For me, it is a powerful and surprising picture of people carrying on with business as usual in a city where nothing is usual anymore. 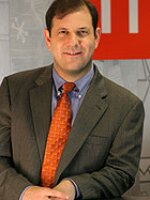 Ken Stern
Ken Stern has served as Chief Executive Officer of NPR since October 1, 2006. In this position, he directs all management, business and strategic aspects of the award-winning media organization.
Sign up for our newsletters!
Keep up with all the latest news, arts and culture, and TV highlights from KPBS.
LATEST IN PODCASTS
LATEST IN EVENTS
LATEST IN TV HIGHLIGHTS
Get ready to vote
What questions do you have about the Statewide General Election coming up on Nov. 8? Submit your questions here, and we'll try to answer them in our reporting.
Launch →
More News