The Department of Education relaxes some requirements of the No Child Left Behind law. The changes include allowing core-subject teachers at rural schools to have an additional year to show they are "highly qualified." The deadline was previously the 2005-2006 school year. Hear NPR's Anthony Brooks, NPR's Michele Norris and Schools Superintendent Jack Broome of Burke, S.D. 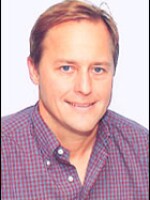 Anthony Brooks
Anthony Brooks has more than twenty five years of experience in public radio, working as a producer, editor, reporter, and most recently, as a fill-in host for NPR. For years, Brooks has worked as a Boston-based reporter for NPR, covering regional issues across New England, including politics, criminal justice, and urban affairs. He has also covered higher education for NPR, and during the 2000 presidential election he was one of NPR's lead political reporters, covering the campaign from the early primaries through the Supreme Court's Bush V. Gore ruling. His reports have been heard for many years on NPR's Morning Edition, All Things Considered, and Weekend Edition.
Sign up for our newsletters!
Keep up with all the latest news, arts and culture, and TV highlights from KPBS.
LATEST IN PODCASTS
LATEST IN EVENTS
LATEST IN TV HIGHLIGHTS
More News