As states have closed down mental hospitals, they've struggled to find housing for the mentally ill. In Florida, assisted-living facilities have become the de facto solution.

It takes just a high school diploma and 26 hours of training to run one of Florida's mental health assisted-living facilities — that's lower than the state requirements for becoming a beautician, a barber or even an auctioneer.

Now an investigation by The Miami Herald and member station WLRN has found sweeping failure within Florida's assisted-living industry, especially within the 1,109 facilities that cater to the mentally ill. The investigation found that those facilities have twice the rate of abuse and neglect compared to homes specifically for the elderly.

Nowhere are those problems more obvious than in Cannon Point, a neighborhood outside Fort Lauderdale. All eight of the facilities on its one U-shaped city block cater specifically to people with mental illness, giving it the highest concentration of mental-health assisted-living facilities in Florida.

It's one of South Florida's strangest places and patrolling it is one of the most complicated police officers you'll find.

On Patrol In Cannon Point

Lauderhill is a working-class city of 70,000 people. At 6 a.m., the sun is not up yet, but Officer Tom Merenda is patrolling the drab stucco buildings crammed into the Cannon Point neighborhood.

Even though the morning is dark and drizzly, Merenda is wearing shorts. His mom says he has nice legs; his colleagues make fun of his chicken legs. They also make fun of his affection for the characters of Cannon Point.

A figure shuffles up to Merenda, screaming something unintelligible. Merenda can just make out the man's grubby hat and stained sweatshirt.

Merenda smiles and says, "Top of the morning to you!"

As a car approaches, Merenda warns the unsteady man to watch out. "Are you retired now?" he asks.

"Well, it's about time to take a retirement," Merenda jokes.

Merenda calls men like this "our mental health consumers." It might sound condescending, but he actually has some very personal experiences.

First, to understand Officer Merenda, you need to understand this neighborhood. The eight privately run assisted-living facilities in Cannon Point try to help the mentally ill keep up with daily medications, get access to regular services and live comfortably.

That's the theory, at least.

A Police Call Every Four Hours

Cannon Point exemplifies the challenges of mental health assisted-living facilities. Police get a call from this neighborhood on average once every four hours. That's 14,000 calls from one city block over the last eight years.

The calls can show the brutal side of the neighborhood — at times dealing with runaways, suicide threats, self-inflicted harm or psychotic episodes.

To make matters worse, a drug-dealing culture has cropped up. Merenda says dealers call the place U-Street, and it has its own YouTube channel featuring videos of street fights and homemade rap anthems.

"It all comes with the territory," Merenda says.

Merenda polices Cannon Point more than almost anyone else in the Lauderhill Police Department. In fact, Merenda is really the only one who wants to patrol it. He has his own nickname for the place: "I call it home because it's my home away from home."

But at this early hour, Cannon Point is relatively quiet. Merenda points to a beige stucco building, the most heavily fined assisted-living facility in Florida.

"This facility here, Briarwood Manor, has one of our more prominent residents. His name is Stephen King," Merenda says. "He's not the famous book writer, he's a famous panhandler. But he's the nicest guy you ever meet — except for when he's on crack."

Two years ago, Merenda was dispatched to Cannon Point because King had gone on a drug-fueled rampage and was holed up in his room. Merenda knocked on the door, calling his name. King, high on crack, let fly a string of curses.

King had stabbed another resident with a large knife and had punched through a television set. When Merenda finally got into King's room, blood was everywhere.

"And you just have to put on some latex gloves and just go in there and try to subdue them without getting blood in your mouth or in your eyes or whatever," Merenda says. His eyes soften. "But he needs help."

Residents told police that the on-duty caretaker was asleep during the whole ordeal.

The incident was one of hundreds uncovered during the investigation by The Miami Herald and WLRN.

State agents caught employees in nearly 100 homes illegally doping residents, tying them up or locking them in isolation. Agents then caught each home committing the same violation again.

There were more than 500 cases where facilities failed to give patients their psychotropic drugs, psychological services or proper oversight. The rate of abuse and neglect was twice as high as at homes just for the elderly.

This was not the city's vision for the Cannon Point neighborhood.

Merenda has no idea how it became a haven for drugs and violence. Earl Hahn, the planning and zoning director for Lauderhill, has a few theories because he's spent hundreds of hours trying to undo it.

"What's that saying? The road to hell is full of good intentions?" Hahn says.

Twenty years ago, he says, the city had a grand plan to turn Cannon Point into a haven for the middle-class elderly. That's the good intention part.

Hahn says someone should have noticed the city was creating a psychiatric ward.

"You know it's hard to establish mental health facilities and many people don't want them in their neighborhoods," Hahn says. "Once we opened it up and said, 'Welcome! Welcome all!' then you've opened up the door. Owners say, 'Here we can locate without the problems.' "

What Can Replace Institutions?

And that's why Cannon Point isn't just a Florida problem. Legal experts, academics and disability advocates say you can pick anywhere in the country and find some version of this: the warehousing of people with mental illness.

In New York, advocates have been fighting "adult homes" that are bigger, they say, than some of the state institutions people are leaving. In Illinois, it's nursing homes: 15 percent of the population are people with mental illness. When mixed with elderly residents, there have been problems with rape and even murder.

But from Merenda's perspective, Cannon Point is at least something.

"If it wasn't for these ALFs," he says, "either somebody would be on the street or they would be with a relative that can't take care of their loved one that's having problems."

But would Merenda send his grandparents to one of these assisted-living facilities?

"Sometimes you don't have a choice," he says.

This is where his story gets complicated. No one knows the problems with mental health assisted-living facilities better than Tom Merenda. His mother, Christine, is in one; she suffers from paranoid schizophrenia.

As he knocks on her door, he whispers, "She hasn't seen me in a while, so she's going to be freaking out."

"Oh, Tommy! Honey! Oh, I love you. I missed you." She hugs him. Her room smells like smoke. Her bed has one sheet. The walls are bare, except for a blue and green finger painting by one of Merenda's daughters.

"And how is my precious little Abbey?" she asks about his daughter.

After the visit, Merenda admits he feels guilty every time he visits her in that drab room.

"I know it's the only option I have because I can't afford to keep her where I'm living and when she is off her meds — I have kids at home and things like that," he says. "I just can't have them grow up in that type of environment."

There's a paradox in the way Merenda fights for this neighborhood. Advocates — and quite frankly commonsense — would say Cannon Point is not helping anyone.

City leaders even agree: They've just passed a law to remove all assisted-living facilities from the neighborhood within five years.

But that leaves Officer Merenda and others to wonder where the residents of Cannon Point will end up next. 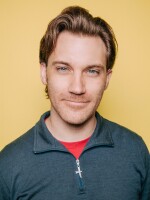