For Two Old Teammates, Risks Of Loyalty Are Real

It is not uncommon for outstanding athletes to succeed in later life, but it is rare for teammates, literally playing side by side, both to be in the spotlight almost half a century later.

But such is the case with two old boys from Syracuse, who were roommates as freshmen, went on to become the starting backcourt, saw their lives diverge after college — and now, at an age when most men have retired, are facing two very different but very painful challenges in the professions they've chosen, in the places they love.

The men, those starting guards of so long ago, are Dave Bing and Jim Boeheim.

I think it's safe to say that no one in sport has ever described the path of Dave Bing. After being an All-American at Syracuse, Bing became, simply, the best player in the history of the Detroit Pistons. That is, he stands, with Ty Cobb of the Tigers, Barry Sanders of the Lions and Gordie Howe of the Red Wings in the most exquisite athletic company of that one major city.

Now, after a successful business career, he is the very beleaguered leader of that place where once he was only an idol.

Bing volunteered to be mayor of the most distressed large American city in the crest of civic corruption. Detroit may literally be broke by the spring, and Bing must impose the most drastic, unpopular measures upon the citizenry. He could have lived out his days as the beloved old hometown hero. He chose to put himself in the caldron. Above all, he was loyal in hard times.

Jim Boeheim not only grew up near Syracuse; he has hardly ever left. Soon, he will have won more games for his alma mater than any coach, ever, in men's basketball at any one college. But now Boeheim's old friend, his assistant coach Bernie Fine, has been fired — vividly accused of molesting young boys.

When the accusations were made, in an eerie echo of the sordid pedophilia scandal at Penn State, Boeheim refused to believe the charges against his assistant. And the fact is that Jim Boeheim is indeed very much to his university and basketball what Joe Paterno has been, in football, a couple hundred miles due south.

And, now it seems, something of Boeheim's grand reputation –– his very legacy –– will, like Paterno's, be much diminished of grace.

Unlike Paterno, though, Boeheim appeared truly thunderstruck by the revelations, and his immediate visceral reaction now looms as unfeeling as it was hasty and foolish. But then — like Bing, the other member of the old backcourt — above all, Boeheim was loyal in hard times. 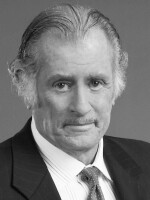 Frank Deford
Frank Deford died on Sunday, May 28, at his home in Florida. Remembrances of Frank's life and work can be found in All Things Considered, Morning Edition, and on NPR.org.
Sign up for our newsletters!
Keep up with all the latest news, arts and culture, and TV highlights from KPBS.
LATEST IN PODCASTS
LATEST IN EVENTS
LATEST IN TV HIGHLIGHTS
More News