In 'Maid,' A Single Mother Finds 'No Way' To Make It On Minimum Wage

While raising her young daughter as a single mother, Stephanie Land cleaned houses through an agency to scrape by. It was back-aching work and the pay — $8.55 an hour to start, $9.25 an hour two years in — just wasn't enough.

Land, who had left an abusive relationship, lived for a time in a homeless shelter with her daughter. She supplemented her housecleaning income with government assistance, at one point accruing seven types of aid simultaneously, including housing and utility assistance, food stamps, child care grants and Medicaid.

Looking back, she says, "There's no way that you can work full time [at] minimum wage and have a family. It's impossible."

Eventually, Land decided to revive her dream of going to college. With the help of a Pell Grant, she pursued a degree in creative writing. Her new memoir, Maid, details her experiences cleaning houses — as well as the hurdles she has faced as a single mother living on public assistance.

On feeling like she knew the people whose homes she cleaned

I knew them by the imprints they left in their bed. I knew them by the ring of coffee from their coffee mug that was always in the same place, or I knew them by what toothbrush they preferred, or what toothpaste or shampoo or just the act of them switching their shampoo. I kind of wondered like, "Oh, I wondered why they do that?" And it very much was a job where I got to know people just by the things that they left out on the counter. Not so much like their home decor or anything but just the little things that they did just in living — that was the interesting thing to me.

On expenses she accrued while cleaning houses

I paid for my gas for the travel between houses, and this was in kind of a rural area, and sometimes the travel time between houses would be a half an hour, and I had to wash my own work rags, which meant driving to a laundromat and doing a few loads of laundry once a week. I was only allowed to work no more than six hours a day. [The agency] said after that I would be too tired and might injure myself.

The Catch-22 ... is you have to have a job first, and you have to prove that you are employed — gainfully, regularly employed — and then you can get the voucher for a child care, depending on what your income is. And then you can go out to different day cares who accept that grant and see if they have an opening, which for a very young child is pretty rare, because it's just not affordable for day care centers to have [children] under 2 years old, which they still consider infants. So it's a lot of work to not only get the ability to go look for a day care center but then to find one, and if they have a full-time spot or Monday, Wednesday, Friday — it's a huge web of difficulty.

There's a thing called a "welfare cliff," and what happens is you get up to a threshold — which is a very firm line — and if you jump over it, then you lose all of your benefits. If there was a time that I made, I think, $50 more a month, and because of that I suddenly had a $50 copay for child care. So even though I was making more a month, I had to pay more. Food stamps is pretty abrupt as well. Like, if you go over the line, then you're suddenly not getting $200-$300 a month in assistance.

On calling the police on her daughter's father, who was abusive

Emotional abuse is so invisible, and it's so confusing [because of] gaslighting. And it usually cuts you down to a point of nothingness. I felt so horrible about myself every second of the day, and he made me believe that I was mentally ill and that I was crazy. So to have a police officer validate what had happened and to have like a slip of paper with a case number on it — I carried that around for months because it was some kind of proof that I wasn't actually crazy, that this person was being truly horrible.

On living in an apartment that turned out to have black mold, which made her daughter, Mia, sick

Mia was very sick as a child. She had constant sinus infections, pinkeye, ear infections. She would come home sometimes and ... we would walk in and I'd look over at her and her eyes were just immediately red. ... I was constantly sick. I think it was just the wet, really damp climate. ...

As a parent you know you want to provide safe, healthy environments for your children. I had a doctor who I was taking Mia to, to be seen for yet another infection. She told me, "You need to do better," and I just looked at her and I'm like, "I can't." It was a defining moment for me — other people are telling me that I need to be a better mom. That was something that I already felt so horrible about.

On going back to school to study writing

I decided to do the paralegal program, because I felt like I needed a job that would make me a contributing member of society and that I would have health insurance and the ability to hopefully pay for housing and child care and food all on my own. Writers are not notoriously a well-paid bunch, so I didn't think that that was really an option for me. But then once [I] ... started going to the University of Montana, which was my original plan ... I felt like if I went for the office job or I went for a job I wasn't totally happy with and then I wouldn't be a happy mother — and I wanted to pursue something that I had wanted to do since I was 10 years old. I felt like if I could possibly do that, then it would show Mia that she could do the same.

Sam Briger and Thea Chaloner produced and edited the audio of this interview. Bridget Bentz, Molly Seavy-Nesper and Meghan Sullivan adapted it for the Web.

A previous Web version of this story incorrectly said that Stephanie Land was married to the father of her first daughter. They were not married.
National 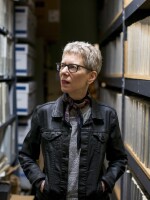 Terry Gross
Combine an intelligent interviewer with a roster of guests that, according to the Chicago Tribune, would be prized by any talk-show host, and you're bound to get an interesting conversation. Fresh Air interviews, though, are in a category by themselves, distinguished by the unique approach of host and executive producer Terry Gross. "A remarkable blend of empathy and warmth, genuine curiosity and sharp intelligence," says the San Francisco Chronicle.
Sign up for our newsletters!
Keep up with all the latest news, arts and culture, and TV highlights from KPBS.
LATEST IN PODCASTS
LATEST IN EVENTS
LATEST IN TV HIGHLIGHTS
More News