No, I did not know. I had never observed the Muslim holiday of Eid al-Adha.

Although my father is a Muslim, my mother is Filipino and a strict Catholic. My parents divorced when I was a child. For most of my life, my dad lived in Cairo while I grew up in Southern California. I'd visit him in the summertime. But the trips never intersected with an Eid celebration.

Now that he and my little brother Ahmed were coming to the States for a few weeks, it seemed like a good reason to host a big Eid feast in their honor.

"Very cool," I said. "We'll definitely have some kharouf ready when you get here." I searched my mind for the English translation of the word. I knew it was some kind of animal. Perhaps ... goat?

In addition to never celebrating Eid al-Adha, I've never cooked goat. I could feel my confidence begin to crumble. Where would I get the meat? Do I have to slaughter it myself? What am I supposed to cook? And umm, which Eid was this again?

Eid means "feast" or "holiday" in Arabic. There is Eid al-Fitr, which comes after the month of Ramadan, and then there is Eid al-Adha. This holiday, which started this past weekend and runs for five days, is "a sacred time of year, but it's also joyous and charitable," says Zareena Grewal, an associate professor of religious studies at Yale University. It honors all the Muslims who have made the annual hajj, the Islamic pilgrimage to Mecca.

As a sign of solidarity, Muslims around the world celebrate. They give money and new clothes to children, spend time with family and friends and most important — slaughter an animal.

I started to get nervous. I wasn't sure if I was even allowed to host an Eid al-Adha feast. I haven't stepped foot in a mosque in ages. And my husband and I have beer and wine in the house. Alcohol is forbidden in Islam.

A few days before my dad and brother's arrival, I called my friend Brenda Abdelall in a frenzy. An Egyptian American lawyer and philanthropic consultant, she is an excellent cook and has a Middle Eastern food blog called MidEats.

"Adha means sacrifice in Arabic," says Abdelall, who is Muslim. "It's all about what Abraham had gone through."

In a story that has versions in both the Koran and the Bible, God asks the Prophet Abraham — who, according to Islamic teachings, established the rites of hajj — to sacrifice his son. Abraham takes his son to Mount Moriah to slaughter him. At the last moment, God — satisfied by Abraham's devotion — sends a ram to take his son's place, sparing his life.

"It's tradition to slaughter an animal and have a sacrifice on Eid. You do it with your family. You eat half of it, and you give the other half away" to those who are impoverished, says Abdelall.

OK, so what am I supposed to do, kill a goat? I asked her. "Goat?" she asked. Muslims can choose any meat — goat, sheep, cow, etc. — to slaughter, she explains, but Egyptians usually do lamb for Eid al-Adha.

After being tormented for days about how to tenderize goat meat, I realized that kharouf means "sheep" in Arabic. I had the wrong translation. I let out a quiet sigh of relief.

Egyptians, she went on, usually serve a dish called fattah: a casserole of rice and bread soaked in a tangy sauce of garlic, tomato, vinegar and meat broth. The top is decorated with large chunks of tender lamb. (See Abdelall's recipe for fattah here. She says you can also replace the beef with the meat of your choice.)

"We have friends who go out to [farms] in Northern Virginia to pick out [an animal] to slaughter," she says. "I go to Whole Foods."

Now that I can do. With the menu sorted, I still had the other looming question: Is it OK to even celebrate this holiday as a non-practicing Muslim?

I turned to Anisah Bagasra, an assistant professor of psychology at Kennesaw State University. She researches how Muslim Americans develop and maintain religious identity.

"Most people who come from mixed-race or multi-religious backgrounds struggle with [identity], particularly because we feel like we have to choose a side," says Bagasra, a Muslim with a Pakistani father and American mother. "They think: Am I being disingenuous if I play into one side over the other?"

I thought about my situation, with my Catholic mom, Muslim father and American lifestyle. If I favor one part of my culture, it sometimes feels as if l am betraying one side of myself or one parent.

And how could I host an Islamic feast when I was devising a plan with my American husband, Darren, to hide our alcohol stash?

Bagasra offered some helpful advice. "In Islam, it's perfectly OK [for non-Muslims] to help celebrate religious traditions with family and friends," she says. "Even if you don't know a lot about Eid celebrations or meals, it's fine to celebrate alongside Muslims and make an effort to make your father feel at home."

It's not uncommon for Hindus to break fast with Muslims during Ramadan in South Asia, she says. And Abdelall says that in Egypt, where there is a Coptic Christian population of 9 million, both Muslims and Christians honor Christmas and Eid.

"Any effort you make is a wonderful effort," says Bagasra.

Still, I felt this nagging guilt. And I realized what the feeling was really about: my own relationship to Islam. I called up Suhaib Webb, an imam and a research scholar at NYU's Islamic center, and told him my woes.

"There is a freedom and agency for people to experience the meaning of faith," he says. "Why would you feel guilty?

Hosting this dinner, he added, "that's totally dope. You're finding some kind of spiritual meaning, searching your cultural DNA. I think this is very personal and meaningful for you."

I nodded silently on the other end of the line.

With that blessing, I sprang into action. On Sunday, the day before my dad and brother arrived to D.C., I invited my other brother, Abdelrahman, 26, and his friends Eslam and Hazem to come over and help Darren and me cook the big Eid feast for Monday. Abdelrahman and his friends had moved to the States from Cairo less than a year ago. I knew they were homesick — and familiar food is an excellent cure.

"You're helping us make the fattah," I told them, along with bamya, an Arabic dish of stewed lamb and okra.

They shared what Eid al-Adha is like in Egypt. "The streets turn into a slaughterhouse," says Eslam. Families who can afford it buy a live animal bring it home and kill it themselves. He winced. "There's so much blood. I hate it."

"We also go out with our friends and watch movies," says Abdelrahman. A lot of new Egyptian films come out especially for Eid.

With three pots of meat bubbling away on the stovetop, I shoved a frozen Costco lasagna in the oven. I almost forgot that it was the first day of Eid. Not exactly traditional — but the point is that we were all together.

And what about the feast for my dad and brother?

It went off without a hitch. We served the food that they would have had in Cairo, where they just were 24 hours before. Except it was happening here. In my home. And that felt epic.

Malaka Gharib is the author of I Was Their American Dream: A Graphic Memoir, about being a first-generation Filipino Egyptian American. 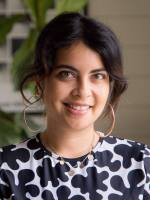 Malaka Gharib
Malaka Gharib is the deputy editor and digital strategist on NPR's global health and development team. She covers topics such as the refugee crisis, gender equality and women's health. Her work as part of NPR's reporting teams has been recognized with two Gracie Awards: in 2019 for How To Raise A Human, a series on global parenting, and in 2015 for #15Girls, a series that profiled teen girls around the world.
Sign up for our newsletters!
Keep up with all the latest news, arts and culture, and TV highlights from KPBS.
LATEST IN PODCASTS
LATEST IN EVENTS
LATEST IN TV HIGHLIGHTS
Election 2022: Live results
Explore all national, state and local returns now.
See results →
More News