Stocks are in turmoil as Russia invades Ukraine. Here are 4 things to know

Stocks slumped on Thursday after Russia invaded Ukraine, sending the Nasdaq index into what's known as a "bear market."

The Nasdaq, which is heavily made up of technology companies, fell 1%, after earlier entering a bear market.

That's when an index drops by 20% or more from its recent record high, though the Nasdaq cut some its earlier losses, leaving it in and out of the technical definition of bear mearket.

The invasion also sent crude prices above $100 a barrel for the first time since 2014. That is likely to reinforce inflation fears at a time when consumer prices were already surging at their fastest annual pace in 40 years.

Here are four things to know as global markets reel.

How bad are things in Wall Street right now?

It's been a tough year for stocks.

Stocks had already been falling though most of the year because of fears about inflation and the prospect of higher interest rates.

The geopolitical tensions in recent days had already made things worse as investors braced for a Russian invasion of Ukraine.

Both the Dow and the S&P entered a correction territory this week, or when stocks fall more than 10% from their recent record highs.

Though predicting stock moves is impossible, analysts warn sentiment will be cautious for a while.

Global stock markets also dropped after the invasion, with Russian stocks down sharply while the ruble, the country's currency, hit a record low.

How is this going to impact people in the U.S.?

The first impact will be felt through energy markets.

Russia is a major exporter of both oil and natural gas, and the prospect of disruptions to its exports have sent prices for both commodities sharply higher in recent days.

Brent crude — the global benchmark for oil prices — went as high as $105.79 on Thursday for the front-month contract.

That surge will likely be felt at the gas pump, where consumers in the U.S. are already paying an average of $3.54 a gallon, though it's higher in some states such as California.

Meanwhile, surging natural gas prices could mean higher bills for heating and electricity. That's even more true in Europe, which is heavily dependent on natural gas from Russia.

Russia is also a significant source of key metals like aluminum and nickel, both of which have wide industrial use.

And both Russia and Ukraine are important agricultural exporters; together the two countries supply more than a quarter of the world's wheat exports.

And what about inflation and the U.S. recovery?

Those are the other potential pain points from the invasion.

Consumer prices surged 7.5% in January from a year earlier, the biggest annual gains since 1982.

The Federal Reserve has already indicated it plans to start raising interest rates at its next meeting in March, and the central bank is ready to move more aggressively should inflation accelerate.

Yet despite the prospect of higher inflation in the near term, it's harder to predict the impact from the invasion over the longer term.

There's also the prospect all the uncertainty from Russia's invasion could slow down economic growth. Revised data from the Commerce Department on Thursday showed the economy grew even faster in the last quarter of 2021 than previously reported, expanding at an annual pace of 7%, the highest in decades.

That means the economy came into the new year with a lot of momentum. The conflict in Ukraine is unlikely to derail that recovery but it is another complication.

And if growth slows, that provides another wrinkle for the Federal Reserve to consider at it looks to crack down on inflation.

Slower growth could make the Fed's plans to raise interest rates a little bit more complicated, but central bank officials in recent days have not sounded as if they will change their plans.

Fed Chairman Jerome Powell is set to testify before Congress next week for previously scheduled appearances, and he's likely to provide more insight into his current thinking.

What about the impact from global sanctions on Russia?

The U.S. and European countries are moving to impose tougher sanctions on Russia, including on its banking and financial systems.

The U.S. is also considering limiting exports of certain high tech goods to Russia, which could affect domestic companies.

But it's worth noting that Russia is a relatively small economy and it's not a big trading partner with the U.S.

The fallout will be greater in Europe, which has much closer commercial ties with Moscow and imports much of its energy needs from the country.

The wild card is the prospect that Russia will retaliate with cyber attacks, which could have economic and financial implications in the U.S. 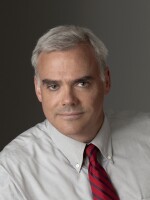 Scott Horsley
Scott Horsley is NPR's Chief Economics Correspondent. He reports on ups and downs in the national economy as well as fault lines between booming and busting communities.
Sign up for our newsletters!
Keep up with all the latest news, arts and culture, and TV highlights from KPBS.
LATEST IN PODCASTS
LATEST IN EVENTS
LATEST IN TV HIGHLIGHTS
More News